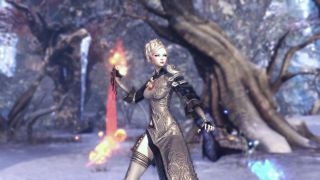 Today, NCSoft announced that almost three years after launching in South Korea and rolling out to the rest of Asia, it's bringing the free-to-play Blade & Soul to Europe and North America, starting with a closed beta this fall and a commercial release this winter.

It's been a while since I played an MMO (World of Warcraft was my poison of choice), and while Blade & Soul differentiated itself in some interesting ways during my short time with an early localized build, not much has changed since the last time I talked to an NPC with an exclamation point over his head. I get quests, I explore big open spaces sprinkled with fantastical beasts, and I click them to death until someone wants to give me a reward.

The clicking, at least, is interesting, even if it stays within the confines of the genre. I was still choosing icons from a toolbar which represented different attacks, but the icons changed contextually depending on my attacks, allowing me to chain them into combos.

As the Summoner class, for example, I use a couple of melee attacks until an icon pops up, allowing me to initiate a stasis attack that holds the enemy (some Island of Dr. Moreau rhino-toad in this instance) in the air like a Jedi. I then have the option to either toss him in the air or set him on fire, and as I level up and learn more skills, I'll have more options that will lead to different combos.

It's basically the same old combat system, but by breaking up my character's toolbar into a branching step-by-step process, fighting felt more dynamic and fast-paced than waiting for a long row cooldown meters.

Moving through the environment was more interesting than it is in most MMOs, especially in the early game. Minutes after rolling a new character, I could sprint and glide through the air like the heroes of Crouching Tiger, Hidden Dragon. I didn't need to save up for a mount before I could haul ass, which is a huge relief, and there are more traversal skills to learn as you level up, such as mid-air dashing and diving down on enemies.

This greater mobility is necessary since Blade & Soul's environments are huge and vertical. Exploring strange lands is one of my favorite things about MMOs, and jumping off cliffs, gliding down alongside waterfalls, then getting back up via launchpads that initiate more cool traversal animations made that part of Blade & Soul exciting.

Blade & Soul also has a different approach to character appearance. It has a dauntingly deep character creation tool (I don't know what "mouth tail" means, but you can bet your butt there's a slider for it) and what you wear doesn't represent your gear's stats. Instead, your stats come from your weapon and eight "soul shield" pieces that are invisible to players, and your appearance comes from costumes that have no stat properties.

I like this idea because it lets me choose what you want to look like and not be forced into fashion suicide because an ugly pair of shoulders have incredible DPS. On the other hand, this means you can't really tell someone is a badass just by what they're wearing, which is one of the most interesting hooks in sharing an RPG world with strangers.

It's not a deal breaker, but nothing I saw of Blade & Soul convinced me to dive into a new MMO either. It convinced many others, though. Over 1.5 million concurrent players jumped on Blade & Soul as soon as it launched in China, almost 8,000 players already signed a petition to bring it to North America, and NCSoft told me that thousands more have been waiting for Western release.

If you're one of them, congrats. If you're just shopping for a new MMO, it looks like NCSoft is taking the localization effort seriously, with hours of English voice acting and gameplay tweaks. And while NCSoft hasn't discussed specific monetization strategies yet, it'll cost you nothing but time to try it.