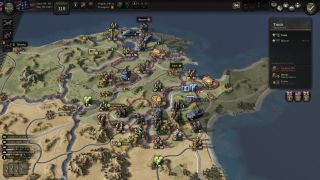 Developers Croteam and 2x2 Games have released a beta patch for Unity of Command 2 that adds a standalone scenario for playing the Battle of the Bulge as the Axis powers. The Update 10 Test adds the scenario “Wacht am Rhein!” to the game, allowing players to take on the command of German forces in a scenario specifically designed to be played that way for the first time. While fans on Steam Workshop have already hacked together scenarios as the German army, this is the first signal of the inevitable full-fledged Western Front German campaign for UoC2. You can download the beta patch and try out the new scenario on Steam by going to Game Properties, clicking the Betas tab, and using the drop-down box to select the beta branch.

The prospect of more Unity of Command 2 is quite exciting, as I personally gave it a 91% in my review. The dynamic nature of the campaign, while it did have some problems in overall strategic management, was an exciting experience that reinvigorated my desire to play wargames. I called it “An excellent wargame for both new and hardcore strategy fans,” saying that “the strategy is very simple to manage but just complex enough that it feels like a challenge.”

The beta update otherwise includes some important bug fixes, a few new features, UI improvements, and some campaign balance changes. You can find all the update notes on the game’s Steam page.