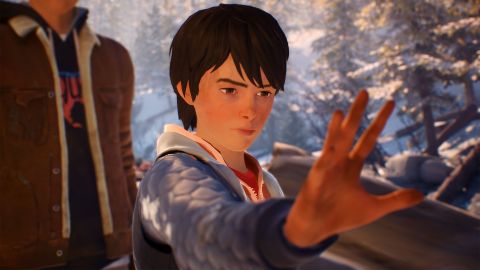 Life is Strange 2 promises a classic roadtrip, but fails to put you in the driving seat.

During the third episode of Life is Strange 2, main character Sean Diaz is presented with a choice that could help bring his ordeal to an early end, but would put his little brother Daniel in danger. Being the responsible father figure that I clearly am, I decline the opportunity. But then later on in the episode, I’m asked to make that same choice again. And again. In the end, the decision is made for me, and everything falls to pieces.

Life is Strange 2 begins in suburban Seattle, where a fatal misunderstanding forces Sean and Daniel to flee their home. In his panic, Sean takes his brother on the run, aiming for his father’s family home in Puerto Lobos, Mexico, and the pair take the first steps on their year-long journey to the border. His decision provides an impressive backdrop to their adventure—chilling Oregon winters, towering Californian forests, and sweltering Arizona deserts offer an ambitious alternative to the series’ traditionally small-town narratives—but also forces Life is Strange 2 to immediately undermine its road-tripping raison d’etre.

Rather than directly portray a 1,500 mile journey, developer Dontnod sticks to its series’ classic tropes. Exploration, dialogue, and character development are its strengths, but those are difficult to achieve within the confines of a Greyhound bus. Instead, the story moves from vignette to vignette, with each chapter set months after the one before, in a place where Sean and Daniel can stay in relative safety for a few days or weeks.

Here lies the game’s most existential dilemma. These havens provide a place to live—at least temporarily—almost entirely off-grid, a rare opportunity to lay low and take stock. In one episode, whole chunks of dialogue are given over to the idea of holding out for next month’s paycheck, while another places the brothers firmly within the nuclear family they both so clearly crave. Those themes, of financial security and familial responsibility, are woven throughout the game, but their importance pales in comparison to Dontnod’s desire for a classic roadtrip, and so Sean and Daniel are moved on, irrespective of the decisions made within the episode.

This problem is exacerbated by the fact that Life is Strange 2’s most powerful tool is not directly in your hands. While players control Sean, it’s Daniel who boasts supernatural abilities. Sean quickly adopts the role of mentor, but his younger brother is a precocious child, and while he might start by using his powers for something as innocuous as cheating at dice, it’s not long before he begins to understand the extent of his abilities. Eventually, the player isn’t just battling with the game’s desire to get you to Mexico no matter the narrative implications, but against a central game mechanic that happens to have developed a personality. It’s a fascinating concept, rarely explored outside the idea of rogue AI, but in a series that supposedly holds player choice in such high regard, it’s deeply misplaced.

The first episode of Life is Strange 2 released in September 2018, meaning the journey from debut to finale took more than 14 months. Nearly four months passed between episodes one and two alone, and while the release cadence sped up as the series reached its finale, the damage had already been done. The time between episodes seems to have been an attempt to mirror the length of Sean and Daniel’s journey, but to do so at the expense of narrative pacing and character development feels misjudged. So much of what the brothers’ story happened off-screen—entire characters and story arcs were relegated to pages in Sean’s diary—that meant it was difficult to stay engaged between chapters.

In a post-Telltale industry, Life is Strange’s structure already feels like an eccentricity. It speaks volumes that when Dontnod announced its next game—episodic narrative adventure Tell Me Why—shortly before the release of episode five, it was made clear that the entire story will release over the course of a few months next summer.

There are some excellent moments dotted throughout the game, and it’s clear that Dontnod has something to say about American race relations. Often, it leans too heavily on patriotic stereotypes to do so, but the final episode in particular focuses carefully on the concept of Sean’s reverse American Dream. Overall though, Life is Strange 2 is more interested in that dream than in its own central themes—those of brotherhood, family, and the passing down of knowledge and responsibility to the next generations. Its desire to stick to the series’ established tropes means you’re forced into set-piece after set-piece on your inevitable road to Mexico, without any desire to cater to the player who just wants to be a good big brother.

Life is Strange 2 promises a classic roadtrip, but fails to put you in the driving seat.