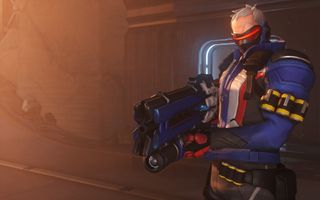 When Luminosity Gaming acquired the Hammers roster a few months back, they became one of the very few North American organizations to run two full-time Overwatch rosters. It wouldn’t take much time for LG Evil, the new squad, to outshadow the native LG Loyal roster by leaps and bounds, leading to their eventual hiatus. Though each player on LG Evil is fantastic in their own right, team captain, Jake, often comes up big in the DPS department and takes the team to the next level. Not only is Jake a phenomenal star in tournaments, but he’s also quite the writer and Overwatch theorycrafter. He recently started a blog that has got the community talking. Let’s take a look at some points he brought up in his latest blog post.

Do you want to appear to be good, or actually be good?

It might sound like a ridiculous question off the bat, but there’s a lot going on beneath the surface. Most of us are ladder players that probably don’t have aspirations to go pro. What we have is our shiny SR badge that we love throwing around (or hiding) on internet posts. No two players are the same, of course, and many do care for execution over SR. As Jake puts it, “SR maximization will always be an incentivized behavior pattern. People want to be highly skilled, but more than that they want to appear to be highly skilled...This should be juxtaposed against the incentive to become the best player one can be: seeking to have the maximum impact upon a given team’s win probability.”

What this means is that SR as an impetus for solid team play doesn’t exist. In its current form, the SR system rewards players who “one-trick” certain characters a bit more than those who make an effort to adapt to a given situation. It’s counterintuitive if you think about the type of game Overwatch is. Jake elaborates, “A player who hits a few precise shots to pick a key player at a key moment (e.g. a support at the beginning of the fight or a DPS who is preparing to ult) is inarguably much more impactful to securing wins than one who merely sits in the back making poor focus decisions, yet the latter player would be statistically superior...”

I’ve discussed this very topic time and again. Important, timely kills and meaningful damage are far more important than non-impact plays. Spouting off about your five gold medals might seem significant in the short term, but what does any of that really mean in regards to your actual skill as an Overwatch player? Jake brings up a recent hot topic as another perfect example:

“The impact of virtually every aspect of Mercy’s kit is poorly captured by statistical measurements. Hitting a five player Resurrection that is responded to by a six player Earth Shatter or Graviton Surge is in fact game losing. The statistics show a high ‘resurrected players per ultimate cast’ while the reality in game is that the enemy team just farmed MULTIPLE new ultimates. The entire HP pool of your composition just went into the enemy team’s ultimate bank TWO TIMES OVER. I can’t really overstate how bad it is to make a poor decision about using Resurrection. In these cases, not only would it have been better to save one’s own ultimate, but also it would have been better to disconnect from the server and let your team play 5v6 because at least then you would have had a chance to swing Ultimate tempo.”

So what’s the solution?

As it stands, SR takes a bunch of vacuum stats into consideration on top of your wins and losses versus teams who are ranked above or below you. So how well you did on, say, Hanzo, in comparison to other players’ Hanzo stats on top of whether you won or lost all gets rolled up into how many SR points you gained or lost. To reiterate, this is not an actual measure of skill, but rather a series of metrics that treat true skill as a tertiary concept. Jake’s solution is a simple one:

“There is only one way to guarantee that every player has the same incentive: strip away all of the hidden formulas and percentile adjustments. Only when each player has only one incentive–to win–will incentive alignment truly come about. The only thing that should impact the SR consequences of a win or a loss is the relative skill of each team. Win a hard game and you should clearly be rewarded more than for winning an easy game, vice versa for losses.”

By trimming the fat off of all the formulas that give you your SR, the playing field becomes level all at once. People who want to stick to one character will still get rewarded, and people who adopt a more flexible playstyle won’t be hurt for their decisions. Everyone’s incentive will be the same, and SR will be a more accurate reflection of one’s skill level.

There are some esports implications surrounding SR, as well as some other, finer details, so please take a moment to read Jake’s latest blog post when you get a chance. It’s well worth your time, and it will make you think about Overwatch a lot differently.

A stellar showing at Blizzard’s developmental Overwatch Contenders tournament has earned LG Evil a seat amongst the top eight best teams in North America. Along with Immortals, Faze, Kungarna, Renegades, Team Liquid, Envision and FNRGFE, LG Evil looks to get their hands on a portion of the $50,000 grand prize. Though high-quality Overwatch tournaments have been something of a rarity as of late, Contenders has not failed to deliver. Be sure to tune in this weekend, July 1st and 2nd, to see who will be crowned the champion of Overwatch Contenders season zero for both the North American and European regions.