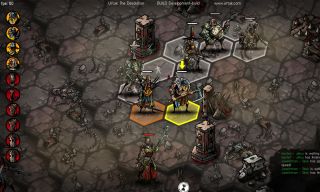 Urtuk: The Desolation has a solid intro: After being experimented on you break out of an evil underground laboratory and into the light of day. You then have to figure out what was done to you before it gets worse—or even kills you. It's a tactical RPG with a grim art style, something like a cross between Battle Brothers and Darkest Dungeon. As you play, expanding your party and defeating enemies, you uncover more of the story of the title character. It has some cool twists.

Equipment in Urtuk is very barebones, but that makes way for an extensive system of quirky mutations. An armored character might be given the power to automatically critical hit on a counterattack, or a berserker the power to heal when it kills enemies. Urtuk is currently in early access, and a bit rough around the edges in the UI and mechanics, but it has the bones of a great game. There's a lot of great forced movement mechanics in it, and battlefield manipulation. The experience of swatting an enemy to instant death in a spike-filled pit is especially sweet.

Urtuk: The Desolation is currently available for $20 on itch.io as an early access title, but will launch on Steam Early Access on February 14. There's a petition to get it added to GOG, as well. You can find the official website here and follow it on Twitter.