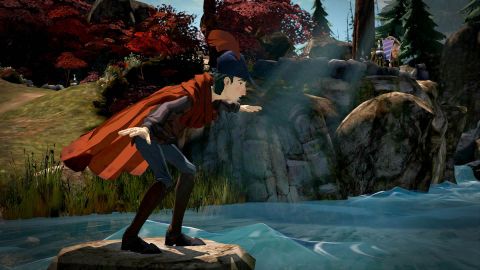 A comfortable adventure on a noble path, but wearing spurs of a squire instead of the crown of a king.

What is it? A modern episodic reboot of the classic series. Unlike most, you can buy episodes individually.
Expect to Pay: $10/£7 (or $40/£32 for all five episodes as they release.)
Developer: The Odd Gentlemen
Publisher: Sierra
Reviewed On: Core i7, 8GB RAM, GeForce GTX 970
Multiplayer: None
Link: Official site

Every hero has to start somewhere. Honestly though, I never thought King Graham of Daventry started out as Guybrush Threepwood—a gawkish young man desperate for respect and glory, as fondly remembered by his older self in the form of stories told to his granddaughter Gwendolyn. ("Grandad, tell me the one about how you almost heroically fed Auntie Rosella to a dragon!" "Uh. How about the time I pied a yeti instead?")

This reboot of the venerable King's Quest series has much in common with that young Graham—both well-meaning and full of confidence, yet frustratingly green when it comes to basics. Graham longs to skip straight to being the kind of knight who can cross a chasm by firing a rope arrow across it. King’s Quest wants to combine Telltale's current episodic style with a little old-school sensibility. The key difference is that by the end of the episode, Graham has learned to fire a bow, while King’s Quest is still struggling with design fundamentals.

Where it succeeds is in being worth rooting for, even during its struggles. New developers The Odd Gentlemen give it their absolute all here, and that includes not relying on nostalgia. Aside from a few references here and there, from specific lines to a very familiar looking tunnel, this King's Quest has basically nothing to do with, cough, 'Master Storyteller' Roberta Williams' rather generously remembered games. It's designed for gamepad instead of mouse, and an adventure that happily wears action's hand-me-downs—though one that never actually goes beyond the most basic QTEs. That means no pointing, no clicking, and not much in the way of puzzles. For a nostalgia driven game, there’s little real nostalgia.

Despite all this though, King's Quest still retains a certain amount of the spirit of the originals, not least in offering a sprawling world that can more or less be explored at will, as well as putting far more focus on character and world design the other games ever did—albeit often undercut by far too many modern jokes that don't fit the fantasy mood at all, and endless crap puns that cry out for a Josh Mandel or similar to come in and show the writers how they're meant to be done. It's not that King's Quest can't be a place to do gags about tourist traps and the like, though it never has been, but that every one makes it more generic rather than more interesting. One of the big reasons that King's Quest VI is the most beloved of the series, aside from the Jane Jensen factor, is that its Land Of The Green Isles setting had a strong sense of place and coherency to it. This new Daventry is a bit too happy to sacrifice that, as well as just preferring to wheel out stock fantasy instead of using folk and fairytales.

What primarily stands out in its favour though is how warm the whole experience is, with a real sense of heart. There's a particularly good moment early on where Graham is trying to cross a river, only for every plan to be rudely stolen by the other knights competing with him for a place in the King's court. Only one of them pauses to realise that without him, none of them would ever have made it across. That sets a good tone for the rest, with Graham slowly earning respect on both sides of the screen and reinforcing that a hero isn't necessarily the strongest or the swiftest or even the bravest. What I particularly liked though is that he also learns from the other side—the chances to steal, to do the wrong thing, that being a hero doesn't always end well. It's not Game Of Thrones or anything, and the lack of a meatier story kicking off by the end doesn't offer much momentum for the next episode to coast on, but it does give Graham a much needed sense of nuance and texture and, crucially, drive.

This first episode isn't the most exciting of stories, focusing on Graham's arrival in Daventry and the—oh, what a surprise—three trials he has to perform to become a pirate. Sorry, a knight. There's some interesting elements to this, including puzzles with multiple solutions and a smattering of moral choices that may or may not lead to anything interesting later on, but it's generally by the numbers stuff with a few excellent puzzles and set-pieces and mostly terrible QTE sequences that go on too long and are no fun at all. One involving a rope arrow is particularly clever, as are a couple of sequences involving movement as well as puzzle solving... thankfully, a little more complex than just turning a wheel, as in the deathly boring prologue.

If you've seen or read The Princess Bride, you'll have a good idea of what the challenges entail... and King's Quest isn't subtle about its pilfering, going as far as to hire Wallace Shawn show up to challenge King Graham to a game of wits involving sinister powders and goblet switching. Still, it could be worse! I particularly liked how Graham solved most of his problems here, not simply using wit to compensate for weakness, by doing so without either cheating or casually falling into adventure game sociopathy. It's a small thing, but it helps sell him as the good king he's destined to be, rather than just the most effective bastard around town.

Unfortunately much of the good here is horribly undercut by appalling pacing, the inability to skip dialogue or cutscenes even if you've seen them before and they're only a long-winded way of saying "nope" (an official Adventure Crime punishable by being flogged, flayed, and fired into the sun), and some terrible puzzle structure. The whole point of Three Trials design is that if you get stuck on one thing, you've got other stuff to work on. King's Quest however is linear, pretending that you have choices when you don't, setting tasks you have no way of accomplishing for ages, and often obtuse about what you're supposed to be doing next. Could this be said of the originals? Well, yes, and far, far worse. Still, suffering from the failings of games from an era where 16 colours were impressive is no good thing in 2015.

This kills most of the puzzles dead. Either you have the item you need, in which case it's immediately obvious what to do with it, or you're methodically trudging around endless forest scenes trying to find anything that you can actually do in order to advance. There are some pointers in a few of these cases, but it's so easy to forget a tiny detail on one screen or forget where the path was to a specific place, or accidentally overlook some object. The controls don't help. There’s no mouse to sweep the screen for items, fussy interaction icons that often won't pop up or register an item unless you're standing at exactly the right point, no status bar to tell you what you’re looking at specifically, and very clunky character movement. Combine that with the unskippable dialogue and you have a recipe for a broken monitor.

This is the kind of thing that really needed polishing further, well before worrying about cute flourishes like whether or not Graham earns a badge for never leaving the town gates open to wolves or has occasional alternative paths. Especially when you only have one (auto)save and so can't go back to explore others. That bizarrely includes when you finish the game, with the mandatory save only letting you replay the ending rather than continue exploring.

It's a testament to the bits that work that its many flaws don't kill the experience—that its clever moments, its bursts of personality, the little zaps of nostalgia in everything from puzzle solutions to music cues manage to prop up the tedious wandering and bland QTEs and the writers tendency to forget this is King's Quest rather than Monkey Island. In just about every case though, it's in ways that are easily forgivable once, in a disposable five hour story that meanders along happily without ever going anywhere of note. Left to be series habits though, they'll quickly become intolerable.

King's Quest: A Knight to Remember

A comfortable adventure on a noble path, but wearing spurs of a squire instead of the crown of a king.