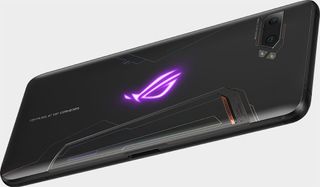 The concept of a 'gaming' phone is relatively new, albeit one Asus has embraced, starting with the original ROG Phone and then the ROG Phone II. Who knows when or if a third-generation model will come out. In the meantime, Asus is bolstering its ROG Phone II with an Ultimate model that ups the ante with more RAM and storage.

It's now available in the UK direct from Asus for £899.99, and is up for preorder in the US at B&H Photo for $1,099.99. Or at least I think those are the correct links—keeping track of the variations and SKUs is a little confusing because of the different hardware configurations, matte black and glossy finishes, and different part numbers in different regions of the world.

There are three main models available—Strix, Elite, and Ultimate. Here's a general breakdown of the RAM and storage on each:

All three models feature a 6.59-inch AMOLED display with a 2340x1080 resolution, 120Hz refresh rate, 1ms response time, and HDR support. The fast refresh rate brings parity between the ROG Phone II and competing models like the Razer Phone (first and second-gen), though Asus claims bragging rights by being first to offer 120Hz on an OLED screen.

This is all powered by a Qualcomm Snapdragon 855 Plus processor clocked at 2.96Ghz with Adreno 640 graphics. There's also a monstrous 6,000mAh battery pack inside.

As with the first-gen ROG Phone, the ROG Phone II (including the new Ultimate model) employs "Air Triggers," which are areas you can tap on the side of the phone to serve as shoulder buttons. This time around, they support both tap and slide motions.

I've spent some hands on time with the ROG Phone II (and the ROG Phone before that). If there's such a thing as a gaming phone, the ROG Phone II is it. Between the powerful hardware (for a phone), innovative Air Triggers, fast refresh rate, large battery, and an ecosystem of accessories, it's probably as close to the concept as it can get, while still being a phone.

It's also a bit on the chunky and heavy side, for a modern flagship, and the aesthetics are decidedly ROG (a good thing or a bad thing, depending on your vantage point). So there's your trade off.

I'm not about to ditch my PC as my gaming platform of choice. Still, the ROG Phone II seems like a prime candidate for Google's Stadia platform, if it's ever supported. As for right now, there's no word from Google or Asus on when or if that will happen.