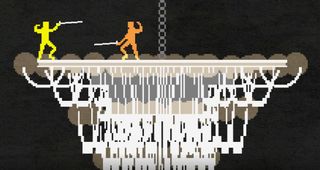 Mark Essen has a simple justification for initially leaving out an online multiplayer mode in Nidhogg. The tech was difficult to build, and expensive to deploy. He did not have an army of netcode experts ready to squash bugs, reduce latency, and seamlessly connect to servers. It was far more important to make sure the bow felt right.

"You'd need two computers, or you could possibly set it up on one computer on multiple windows," says Essen, as he reflects on his halcyon days wheeling the Nidhogg prototype to every indie showcase in the world. "Just practically, it's harder to make an online-only multiplayer game."

After years of work, Nidhogg arrived on Steam in the beginning of 2014. By then it did have network play, but that wasn't, it turned out, the main draw. Nidhogg immediately sparked a flashbulb moment in gaming. Here was a 2D, one-versus-one swordfighting simulator, with simple mechanics, a Luddite Atari 2600 art style, and a distinct focus on couch multiplayer, that seemed entirely out of step with the rest of the video game industry.

Five years later, Nidhogg remains one of the most thrilling experiences of the decade: Living proof that the world is still capable of falling in love with local multiplayer. Innovation, through limited means. It's almost horrifying to imagine what would've happened if Nidhogg had a real budget.

Games that made us believe in the couch again:

The story of video games in the 2010s is the story of us slowly conceding our brains to the internet, all for the promise of more purple guns in Destiny. Despite our protests, and despite the fact that deep down, we probably know better, nearly everyone gaming on PCs is clinically attached to some sort of always-online robber baron. What's your vice? Hearthstone, Fortnite, League of Legends, Dota 2? They are all great games, but they're also all devious machines built to levy our paychecks with the power of new skins, new maps, and bimonthly updates.

The idea of buying a game so you can play it in its native state, offline, without patching or installing, with friends and family, is a rapidly crumbling memory. Call of Duty 4: Modern Warfare is one of the great couch games of all time. Its 2019 rebirth, of course, shipped without local competitive multiplayer.

This isn't necessarily a bad thing, or a good thing. It is, simply, the state of things. Triple-A publishers, in the megagame era, are betting on the interminable contraptions that keep the service model viable. Thankfully, indie studios stepped up to the plate throughout the decade to remind us of a time when multiplayer didn't require an account password and a wi-fi connection.

Duck Game, Stick Fight, Gang Beasts. These were all modern games built on the archaic bones of Goldeneye and Halo—a time before placement matches, when superiority was only ranked on a dorm-room floor. And like Nidhogg's origin story, most were constructed that way in order to cut costs.

Beau Blythe tells me he was living in his parents' garage when he began work on the essential Samurai Gunn. Any added features on top of the core gameplay were out of the question.

"Local multiplayer is more accessible to small studios and independent developers since you don’t have to provide online infrastructure, community management, and marketing to build a player base," says Blythe, who's currently hard at work on Samurai Gunn 2. "I imagine large studios view local multiplayer as a feature that will be seldom used, so it’s not worth implementing. You would have to design for it from the start, and there are limited technical resources when you consider the graphical fidelity that these games are trying to reach. To require two-player support, you would have to render everything twice. It’s a lot to think about and it doesn’t ensure any more sales."

Daniel Sterger, the designer of the hilarious, outstandingly pornographic Mount Your Friends, believes that as a rule, indie developers tend to exploit inefficiencies in the triple-A market.

"We have to push against mainstream trends to an extent," he says. "We don't have the ability to compete head-to-head so we turn to niches we believe have an audience that isn't being approached by the industry." Sterger continues by noting that his presence outside a major studio allows him to not be stymied by "market research" or a massive, micromanaged design team, which allowed him to experiment with, say, a video game about ascending a mountain made of jiggling flesh.

Another, more specific reason? Mount Your Friends was first conceived in a game jam, and built in a weekend. So many indie games first make a name for themselves on the tour of PAXes, Cons, and other industry bacchanals, and local multiplayer became the ideal way to demonstrate a project seeking publisher support in 15 minute intervals on a hectic show floor.

"[It gives] developers easy access to people unfamiliar with their game to test their designs, [compared to] an idea built around level design, complex AI, or worldbuilding," says Sterger.

Most importantly though, each of the developers I spoke to harbored a deep, fundamental passion for local multiplayer, and some expressed dismay about the direction the gaming hobby is going. It often feels like triple-A publishers expect us to sink thousands of hours into their new hub world, and its new systems and endlessly refreshing suite of seasonal events and corresponding thresholds of loot. Sometimes, when I miss a new game in its first week of release, it feels like I'll never be able to catch up.

Landon Podbielski, designer of Duck Game, says his aesthetic true north is the euphoria he felt as a kid playing ToeJam & Earl, TimeSplitters, and Halo: Combat Evolved—three games that arrived before the living-game singularity.

"I wanted something new to play with my friends," he remembers, on his time toying around with GameMaker in 2013. "I showed him a platformer game I was working on starring a duck. He told me I should make it so we could fight each other. I added a second duck and a shotgun, and Duck Game was born."

Podbielski tells me he will never forgive Halo 5, which added a clumsy MOBA-like veneer on top of Microsoft's stainless formula, leading to widespread fan revolt and a trip back to the drawing board for 343 Studios. It's the sort of game that represented an unseemly tipping point, where a thirsty emphasis on commodification superseded the legacy of a classic franchise.

Obviously it's impossible to match the unlimited resources bequeathed to Master Chief, but thankfully indie developers have picked up the slack, and have spent this decade constructing a decent facsimile of the reasons they fell in love with video games. Call of Duty isn't returning to its split-screen roots any time soon. But surprisingly, the past 10 years has taught us that a duck with a shotgun does a decent job of summoning the same feeling.

"Someone will always be pumping out that delicious bubble gum pop, but there will always be people who've chewed too much gum and want a new thing," finishes Podbielski. "As long as we make what we love it'll make us happy above all else, and when culture wraps around again in a decade or so, our weird shit will be relevant again."