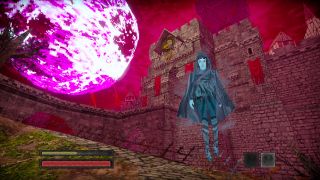 Haunted PS1 Demo Disc isn't actually on a disc, nor does it contain any PS1 games. It's a collection of mostly—but not exclusively—horror games evocative of the '90s, complete with low-res textures, lots of fog and big ol' polygons. The collection can haunt your PC now, and it's free.

I've dipped into most of the demos, some of which seem to be more or less complete experiences, and it's been a wild trip.

There are your conventional 'look around a spooky house in the dark' affairs, one of which looks more like a 2010 horror game than something from the '90s, but sometimes those houses have bees. I can't tell you much about the horror FPS Killer Bees because ten seconds into it I was assaulted by a swarm of them, which couldn't care less about all the bullets I was firing at it, and then they killed me. The bees lived up to their name.

First-person seems to be the perspective of choice for a lot of the games, though they range from old school first-person shooters to a narrative adventure about a recently-evicted mouse trying to get some cheese. In Tasty Ramen, meanwhile, you're trying to escape a shop while being hunted down by a diminutive ramen mascot.

A few of the games eschew horror altogether. Neko Yume, for instance, is a... well, I honestly don't know what it is. You're dreaming. There are cats. I have no idea what's going on. Yet Neko Yume might be one of my favourites. One moment I'm in an empty modern city, then I'm hanging out in a tower with some feline monks, and then I bump into a smaller cat and I'm teleported to a field outside a castle. I have no idea where I'm going to end up next, or what the cats are all about, but I can't wait to take another nap.

With the games all being contributed by different developers, there's a broad range of styles and interpretations of the PS1 aesthetic, and there are some real treats among them. Heartworm plays and looks like Silent Hill, right down to the fog, but it's the demo for open-world RPG Dread Delusion, pictured above, that made the biggest impression. Even without the rose-tinted goggles of nostalgia, it just looks incredible.

A themed anthology seems like a good way to shine a spotlight on indie dev projects, which might normally fall through the cracks. I didn't recognise any of the names before, but now I've got a few new games to keep an eye on.

You can grab it yourself for free on Itch.io now, where you can also find links to the individual developers' pages.