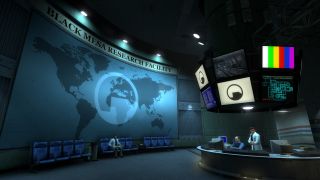 Black Mesa has been in development for so long you could be forgiven for forgetting that it wasn't already out. Originally released as a Half-Life 2 mod all the way back in 2012, it's been available in standalone form on Steam Early Access since 2015. But with the ambitious Xen chapters—which effectively serve as an expansion—pretty much finished, the full game will soon be given the 1.0 brand and released into the wild.

With a release candidate almost ready, Crowbar Collective has revealed some of the changes, which you'll be able to test in a public beta before it leaves Early Access. AI has received the most work, and soldiers will apparently be more competent, using suppressing fire, flanking manoeuvres and taking advantage of their weapons more effectively.

Since the AI is better, Crowbar Collective has also tweaked areas to make better use of the more skilful enemies, as well as making some changes to improve the game's pace. Some older areas have also undergone a makeover to match the visual quality of the extremely pretty Xen.

Following the launch, the team will be tinkering away and watching feedback, eventually releasing 1.5 version. "We jokingly call this Black Mesa: Definitive Edition, but don’t worry, it will not be any type of re-release or paid content," reads the update. "After 1.0 we will take a few months to go through the game, identify rough spots, and polish the art on Earth and Xen. We’d also like to continue to improve the workshop and organize team and community events to document as much as we can about the Source engine and how to best use it."

After being in development for the better part of a decade, I can't wait to get my hands on the complete package. If you can't wait a little while longer, the whole thing, including the Xen chapters, is still playable in its entirety now.