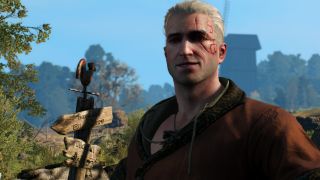 The Witcher 3: Hearts of Stone

To call Geralt of Rivia a bit of a stick in the mud is an understatement. The man's an oak tree in a tar pit. Sure, he lets his hair down when he gets drunk and frocks up with the lads, but he is mostly a serious monster-hunting man.

When he's given an impossible quest to show a dead man the time of his life, that changes. The dead man in question is Vlodimir von Everec, a debauched nobleman turned bandit lord, and the night in question is the night that Geralt's ex Shani invites him to a wedding.

Here you are navigating this awkward social situation—your ex-girlfriend introducing you to her university pal, then having to meet an extended family you'll never see again—while also having a ghost possess you. Vlodimir agrees to two conditions: That he'll return to his eternal rest at midnight and that he'll let you have your body back temporarily if you need it. Which you mostly do to apologize for the things he says and does.

As the player, the lines between Geralt and Vlod are blurred. When the V-man's in charge Geralt puts his hands on his hips and grins an uncharacteristically wide grin, but although this means Geralt is no longer running his own body, the player still is. Sometimes Vlodimir says things on his own recognizance, but at other times you choose his dialogue options. It's an opportunity to relax and roleplay a man who flirts outrageously, dances like everybody's watching, and is always the centre of attention. Like the chapters where you get to be Ciri, it's a nice change of pace.

It's a nice wedding too. There's a table of halflings playing Gwent, and if you lose to them they make you wear donkey ears for the rest of the night, which other guests will comment on. Drunks are chasing pigs, men are fishing their dates' shoes out of a pond to prove their love, and of course there's plenty of dancing and drinking, and you can participate in all of it.

There's also a dog and firebreather who've gone missing, and when Vlodimir promises to find them because he thinks it's a laugh to be a witcher on a quest, suddenly you the player are pretending to be a man pretending to be Geralt, just like we've been doing for the previous 70 hours or so. It's a weirdly meta little touch. "Hey, remember what this game is like when it's not about chasing pigs?" But mostly it's a chill time, a break before Hearts of Stone gets back to the serious stuff. It's supposed to be an opportunity for Vlodimir to have the time of his life but Geralt ends up having a good time too in spite of himself, and so do we.