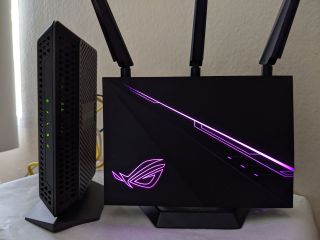 Without hardware components like processors and graphics cards, there isn't a whole lot you can do to control your gaming experience with Stadia. Your settings choices are limited to resolution, with only three to choose from—720p, 1080p, and 4K, assuming you have a Stadia Pro subscription. The quality of your Stadia experience is at the mercy of your ISP and Google's data network, but there are a few things you can do to ensure you get the most out of your internet connection, starting with getting the right modem and router, and using a wired connection instead of wireless, when possible.

From our time testing Stadia, this is what we recommend you have before you buy in, and what you need to know.

While Google Stadia says it works with a minimum connection speed of 10 Mbps, we wouldn't recommend that experience to anyone. You'll be limited to a fuzzy 720p picture, if it works at all. Also, if you're on wi-fi, it's unlikely you'll get the full speed of your internet connection, so you'll want some buffer.

Here are the speeds we actually recommend for using Stadia. While these numbers might be overkill, they will hopefully prevent Stadia from stuttering or dropping image quality to maintain a smooth framerate. And if there are other devices on your network sucking up data, the extra bandwidth could make all the difference.

How much bandwidth do you lose between wired and wireless?

This can vary between ISPs and the kind of router your have. Not every router is made equal when it comes to 2.4 GHz and 5.0 GHz connections. Some have more throughput than others, and the distance between your device and router can make a dramatic impact. You will always get a better connection via Ethernet than wireless. Wi-fi has gotten better over the last few years, thanks to wi-fi 5 (802.11ac) and now wi-fi 6 (802.11ax), but any good 802.11ac device will offer speeds that are plenty fast for Stadia... provided you're on 5GHz, aren't too far from the router, don't have too many interfering signals or walls in the way, and aren't overloading your network with other activity. Nothing to worry about!

In my experience, you can lose more than 50 percent of your total bandwidth when you switch your device from a wired to a wireless connection. That's not guaranteed, but it can also be worse, if you're in a far corner of the house away from your router. This is what I have for my internet set-up:

I ran a speedtest on wired and wireless, then compared the results.

And that's connected to the 5Ghz frequency, too. There are certain factors that cause that loss in bandwidth, but the two most important ones are proximity of my PC to the router, the quality of the integrated wi-fi chip on my motherboard. My PC is in the same room as my router, but it lacks a wi-fi antenna, which makes a big difference. My PC is the only thing sucking up bandwidth right now, and I'm not streaming anything on it.

What could also be affecting my wi-fi are signals from other wireless networks in my neighborhood. I live in a dense apartment complex, so just image how many competing signals there are just in my immediate area, especially in the evening. If your wireless throughput is poor, switching wi-fi channels on your router can alleviate that issue. Newer routers are often smart enough to do this automatically. You can also upgrade to a mesh-based wi-fi system if you have a larger house, which provide better coverage than wireless range extenders, but aren't as high-performance as the best standard routers.

How do I know what bandwidth my Chromecast is getting?

There are two ways to measure this. The first is an app that can detect your Chromecast and do a speed test on that device. I personally use an app called SpeedCast (free on Google Play). You need to have your TV turned on and tuned to the HDMI channel that your Chromecast is plugged into for the app to detect it. Once on, just press the button on your app to start the test, and a live feed will appear on your TV. It's accurate, too; it would only give me speeds that I purposefully limited my bandwidth too.

Your second option, if you're savvy with your router's admin portal, is to login to your router's admin portal and prioritize the internet traffic to your Chromecast. Generally, you'll type 192.168.1.1 into your browser (or if you have a newer Asus router like me, router.asus.com) and navigate to the QoS (Quality of Service) options. If you have QoS options, you should see something called 'bandwidth limiter' and 'Adaptive QoS'.

You can use bandwidth limiter to limit other traffic that would take away bandwidth from your Chromecast, or you can prioritize your streaming traffic with Adaptive QoS.

What kind of router and modem do I need?

If you have an internet connection at home right now, then your modem is obviously compatible with your Internet Service Provider. But if it's an old modem, or one you rent from the ISP, look up its specs—make sure it's rated for the speeds you're paying for, and consider contacting your ISP for an updated model if it isn't. Many ISPs require you to use their modem, but you may be able to get them to send you a much better one if it's dated.

The router you have more control over. Many ISPs provide combo modem-routers, but their wi-fi signal is often poor, and they offer limited control over your network. You're better off with a standalone router. Here are some key features to look out for as you read specs and reviews of routers:

Any of the best gaming routers we recommend will have these features, but you don't have to buy one of those; just make sure whatever router you get supports the above. Wi-fi 6 is the new standard, but not every router, motherboard, and wireless adapter has made the switch yet. Plus it's more expensive, so go with a high-end wi-fi 5 router if you're still looking for great performance but want to save money.

A quick note on 1.4GB-rated modems: stay away. Many have issues across all brands because of a defective Intel Puma 6 chip that causes high spikes in network latency and network jitter. That will seriously impact your gaming performance and general internet use.

Is it better to get a dual modem/router or separate ones?

Using separate devices will give you more flexibility if you want to upgrade your network to be faster or have more features. If you end up upgrading your service, you'll only have to replace the modem instead of the entire device, and separate modems and routers generally have more features.

Combo modem/routers can be less reliable too, depending on the brand. My old combo, the Asus AC-2600, started having lots of connectivity issues only a few years after I bought it, and Asus hasn't release a firmware update since its initial release.

But if you check around and find a good modem/router combo that is still supported with regular firmware updates, it does provide the convenience of saving space, less wires, and can be a third-party gateway.

Can a high-end router give me more bandwidth than what my ISP advertises?

No hardware in your home can change the speed your ISP is providing you. But it is possible that old hardware is limiting you from achieving that full speed, or even beyond what your ISP advertises.

Despite my Spectrum connection being rated at 400 Mbps, I can get speeds closer to 500 Mbps during off-peak hours thanks to a new high-end router. I didn't get those speeds before, but they were waiting there, unrealized—my old hardware simply couldn't take full advantage of the bandwidth Spectrum was sending my way.