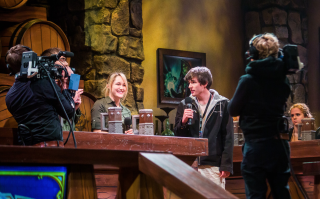 With women making up around half of the world's gamers, why are there so relatively few high profile women pros in esports, and what can be done to further encourage their participation? That was one of several questions addressed at GDC on Tuesday in a panel titled Growing the Participation of Women in eSports. The panel was moderated by Lil Chen, designer for TED and former competitive Smash Brothers Melee player, and panelists included competitive Counter-Strike player and managing editor for ESEA Heather 'SapphiRe' Mumm, Kim Phan, the senior manager of esports for Blizzard Entertainment, and Rachel 'Seltzer' Quirico, esports host and member of the Frag Dolls team.

A number of issues were discussed in the panel, with the participants drawing on their own experiences from their competitive gaming careers. Heather Mumm spoke about often being the only woman on a team of men, and how she routinely felt blamed by fans for losses and yet denied credit for wins. A common perception, Mumm said, was that if her team lost, it was because they had a girl on the team, but if her team won, it was because the rest of the team carried her.

Kim Phan talked about why women might hesitate to become involved in esports, addressing the negative attention women routinely face coupled with the fear of speaking up about women's issues in gaming. She sympathized with the fact that many women don't want to be seen as the person who's always making a 'big deal' of things, which can make it difficult for women to support one another by speaking openly.

Rachel Quirico brought up additional elements women often feel they have to worry about besides simply focusing on playing the game: concerns about being judged on their appearance, and having to be careful to seem friendly—but not too friendly. She felt that drawing more women into competitive gaming would help alleviate these distractions. More women in esports should serve to make for a more well-rounded portrayal of women in competitive gaming in general, so they're not just seen as 'the girl' on the team but recognized for their different skills and personalities, as men are.

While acknowledging anyone in the public eye and on social media must perform a cautious tightrope walk regardless of gender, and that anyone can draw anger and criticism for their opinions, Quirico stated it's more perilous for women because threats are far more common. “It’s about once a week that I wake up with something really upsetting in my inbox, and I show it to my boyfriend, I show it to my coworkers, and they are shocked at the kind of stuff I get," Quirico said. "And you just have to realize that the women you know who are interacting in this space are walking through a minefield and you guys are skipping through a daisy patch."

The panel also discussed female-only tournaments, and why they're both beneficial and necessary in the current climate. Chess, for instance, features tournaments for women only, not to exclude men but to encourage women to participate. It doesn't mean women don't still practice against male players, nor is it intended to keep them out of regular tournaments.

Quirico compared it to putting on a tournament in a region where a game is unknown, which acts as a draw for a new audience. She said it was about increasing awareness and creating a welcoming environment for women, not about a difference in skill level between genders. Seeing teams of women playing competitively could inspire and encourage those hesitant to get involved.

Solutions were discussed, though there's certainly not a single, easily-outlined answer that's certain to improve the situation. The panelists called for more vocal support from those in the public eye, like well-known esports champs, as well as more support from tournament organizers. Also, they hoped for better rewards for top female players in the future, as well as more stories in the media, since much of the press coverage tends to focus on controversies when it comes to female esports figures. The ultimate goal, the panel concluded, is to make esports a more welcoming environment for everyone.