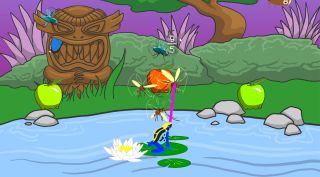 Frog Fractions, the 2012 browser game, is an enduring oddity that's packaged as an edutainment romp designed to teach your mites about the wonderful world of fractions. It absolutely isn't that. It is, however, brilliant and weird, and soon to arrive on Steam.

The Game of the Decade Edition has been remastered as a native executable and will be free when it launches in mid to late 2020, just like the browser version. Neither the Steam page or designer Jim Crawford mention other changes, but I'd be surprised if Crawford didn't sneak something else into it.

Frog Fractions 2, for instance, snuck out inside an entirely different game, Glittermitten Grove, created by a different developer. Thousands of prospective players spent two years looking for it. Following that, I just can't imagine Frog Fractions Game of the Decade Edition launching normally.

If you've not played the original, you deserve to go in untainted, so I will instead leave you with Steam's largely spoiler-free description.

In Frog Fractions, the player controls a frog sitting on a lily pad. The frog must use its tongue to attack oncoming insects and protect its fruit, in the vein of Missile Command. Between waves of bug attacks, the player can purchase upgrades such as lock-on targeting, a cybernetic brain, and a flying dragon.

If you can't wait for the Game of the Decade Edition, you can still check out the browser version.