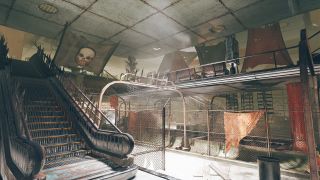 Welcome to Watoga, city of the future! Unfortunately, the future got a buncha nukes dropped on it and all that's habitable in Watoga now is the series of automated parking garages that the city was built on. And those garages are probably filled with raiders. Sorry about that.

That's what we gather from a bit of info Bethesda released about the upcoming Wastelanders expansion for Fallout 76, which was originally planned for 2019 but was delayed until later this year. The expansion will add human NPCs to the game for the first time, and those NPCs need a place to live. The Watoga Underground is one such place, and judging by the skull banner, spikes lining an escalator, and a tattered flag reading "Leave or die," it looks like some raiders may have made it their home.

"Watoga, The City of the Future, envisions a bustling, walkable metropolis where the streets are clear of illegally parked automobiles, traffic and hit-and-run accidents," Bethesda says. "The city is built on top of a massive series of automated parking garage systems which allow citizens to drop off their cars and store them until they’re needed again."

There's a couple more screenshots and a bit of concept art below from Watoga Underground. We still haven't heard a concrete release date for the Wastelanders expansion, but Bethesda says it's "coming soon" so you may be exploring the parking lot of the future, of the past, in the very near future.

And if you're playing Fallout 76 these days, or looking for a reason to jump back in, there's a double XP event taking place from January 9 to January 13.