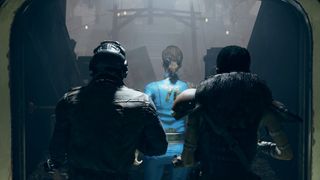 The Fallout 76 Wastelanders update promises to do big things for Bethesda's multiplayer survival sim through the addition of NPCs and companions, a new story quest, dialog options, and other options that will hopefully make it, you know, more Fallout-like. It was revealed at E3 2019 and was expected to be out near the end of last year, but that plan took a Power Fist to the face in October, when Bethesda moved it into the first quarter of 2020.

A "small number" of Fallout 76 players will soon have an opportunity to see what the big update will deliver, by way of a Private Test Server that's set to go live later this week. The test will be PC only, and sounds pretty restrictive: Players invited to take part will be required to sign an NDA, and will not be allowed to stream, record, or even discuss the test sessions. Testing will take place on a Wastelanders-specific development build of the game, "and you should expect to encounter issues during gameplay," Bethesda warned.

Testing will begin with only "a few hundred" players. Bethesda didn't say whether it will expand that number as the test progresses, but the plan is to keep the PTS online full-time, rather than running scheduled sessions. There may or may not be any wipes during testing (the goal is to maintain progress throughout, but these things happen), and either way, PTS progress will not carry over to the live game when Wastelanders rolls out.

"Aside from occasional downtime for maintenance, invited players will be able to access the Wastelanders Private Test Server at all times after January 17 until we bring the PTS offline at a later date," Bethesda said. "We will evaluate what adjustments and fixes we can implement for the Wastelanders update based on your feedback and bug reports, and what will need to wait for a follow-up patch."

To sign up to take part in the Fallout 76 Wastelands PTS, hit up bethesda.net prior to 6 pm ET on January 14.