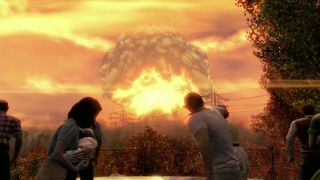 Remember when Todd Howard said that Fallout 4 would give players the option to take a less-violent approach to life in the wasteland? Not entirely without bloodshed, of course, but one in which “you can avoid [killing] a lot?” He wasn't kidding, but it turns out that he wasn't entirely correct, either. As Kyle Hinckley demonstrates over a 37-part YouTube series, it is possible to get through the entire game—on Survival mode, no less—without snuffing out a single, precious life.

That's not to say that lives aren't snuffed, but Hinckley's high charisma means he's able to convince others to do the dirty work, so his hands remain technically clean. Naturally, there are numerous reloads over the course of the adventure, as he's forced to retry ability checks in lieu of simply blowing holes in things. But given the way the game pushes players into killing, and the tendency of companions to be quick on the trigger, I'd say it's a fair compromise, and the ultimate goal here is not to avoid death, but to avoid personally inflicting it.

Despite Howard's promise of increased player freedom, Hinckley told Kotaku that he's “disappointed in the lack of diplomatic solutions” to problems, which he sees as a departure from the previous games in the series. “My version of pacifism isn’t really diplomatic, it’s more exploitative of the game mechanics to achieve a zero-kill record,” he said. “In other [Fallout] games, you had a lot of alternatives for bypassing the combat, whether it was with sneaking, speech checks, or a back door opened with lockpicking and hacking. In fact, in previous games (at least 3 and NV), your companion kills didn’t count towards your record either.”

The last minute of Hinckley's final video proves his claim that he made it from start to finish with zero kills, but of course there are some spoilers along the way, and in the Kotaku interview as well. Consider yourself warned, and then watch the whole thing here.