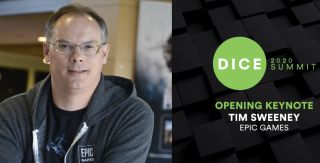 Epic Games boss Tim Sweeney offered some stinging criticism of loot boxes and "pay-to-win" games during his keynote speech at this year's DICE Summit. As reported by the Hollywood Reporter, Sweeney said that said that the industry needs to move away from a "customer adversarial model" if it wants to maintain the trust of its audience.

"We have to ask ourselves, as an industry, what we want to be when we grow up? Do we want to be like Las Vegas, with slot machines ... or do we want to be widely respected as creators of products that customers can trust? I think we will see more and more publishers move away from loot boxes," Sweeney said.

"We should be very reticent of creating an experience where the outcome can be influenced by spending money. Loot boxes play on all the mechanics of gambling except for the ability to get more money out in the end."

The inability to cash out is what has prevented some jurisdictions from defining loot boxes as a form of gambling: The UK's Gambling Commission, for instance, said last year that because loot box rewards can't be officially monetized, they're exempt from being classified as gambling. But the technical correctness of the definition is losing ground to relatively obvious "common sense" concerns, and calls for some form of regulation are growing.

Sweeney was similarly critical of what he called the "customer adversarial model" that's particularly common on social media platforms. "We have businesses that profit by doing their customers harm," he said. "Facebook and Google have been one of the leaders in this ... They provide free services then make you pay for their service in loss of privacy and loss of freedom."

Separate from the economic aspect of the business, Sweeney also touched on the growing politicization of discourse within the industry. He said that games have become "as much a communication platform as an entertainment experience," which confers "special responsibilities we’ll have to take very seriously."

Interestingly, while both game content and game makers (and conversations about them) have become more overtly political in recent years, Sweeney believes that the solution is to remove politics from the equation entirely.

"The world is really screwed up right now. Right now our political orientations determine which fast-food chicken restaurant you go to. And that’s really dumb," he said, as quoted by IGN. "There’s no reason to drag divisive topics like that into gaming at all."

Businesses should be "neutral venues," where employees and customers alike "can hold their own views and not be judged by us for that," he said.

"Epic’s mission is to build great technology and great games. And we can count on every employee at Epic—we can even demand every employee at Epic unite behind that mission. But every other matter we have to respect their personal opinions. And they may differ from management’s or each other’s or whatever."

Sweeney said that the best way for companies to avoid "controversy around political censorship" from foreign nations, is for them to "divorce themselves from politics."

It strikes me as an impossible position to take: If there's one thing the recent Blitzchung controversy clearly demonstrated, it's that a determined commitment to "neutrality" is itself a political position in favor of the status quo. Blizzard's move to silence political speech from its esports presentations was arguably the reason the company found itself enveloped in months of scandal.

If you want to read more about this subject, Tyler, Wes, and Tom on our team published this roundtable discussion about political expression in games.

Update: Sweeney expanded upon his keynote comments on politics on Twitter, clarifying that he didn't mean games should be apolitical, but that their politics "should come from the heart of creatives."

And when a company operates an ecosystem where users and creators can express themselves, they should should be a neutral moderator. Else the potential for undue influence from within or without is far too high.February 12, 2020

That's a clearer distinction, but Sweeney muddied the waters in another tweet calling back to his allusion to Chick-Fil-A, well known for its efforts in opposition to same-sex marriage, in his keynote. "I think a company like that shouldn’t take a position on an issue like this, because it’s out of the scope of their mission. If one’s mission is to make great food, and 1000’s of employees have come together to support that, why drag them into an issue many disagree on?"

Chick-Fil-A wasn't dragged into anything by its marketing department, though, but by its corporate leadership. And as its opposition to same-sex marriage became public, choosing to eat there—or not—became an inherently political act. Likewise, Blizzard's decision to punish Blitzchung for his statement on Hong Kong was unavoidably political, and Sweeney's statement in October 2019 that such a thing would never happen at Epic Games was political.

This tweet seems to best sum up the point Sweeney is striving to make: Platforms should not interfere with the creators that use them. That's fine as a broad principle, but as Valve discovered through its indifference toward bad behavior on Steam, an absence of standards is an invitation to trouble.

Primarily I’m concerned about undue corporate influence unconstrained by stated principles and values, particularly when companies operate ecosystems where gamers and creators express their views, and the resulting divisions. See for example:https://t.co/j7sFmhDMG2 https://t.co/vQ9e4qOmS3February 12, 2020