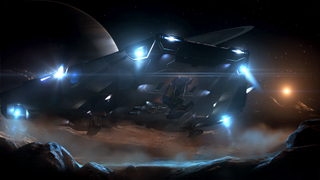 With a bang, a flash and a rather well put together launch trailer, Elite Dangerous: Horizons has touched down. At least, part of it has. Horizons refers to a 'season' of expansions rather than any one update in itself—today we're actually getting the first instalment of the Planetary Landings component. Any rocky world you find can now be set down upon and explored in the new Scarab recon vehicle. Earth-like waterworlds are to follow in a future update (and I have my fingers crossed for exogorths).

If you're not an Elite backer with a lifetime expansion pass but you do own the game, Horizons will set you back £30/$45. Whether or not you own Horizons, however, everybody will be playing in the same happy galaxy. If you're starting from scratch, Horizons will cost £40/$60 and includes Elite Dangerous.

Andy listed the Horizons beta as his PC gaming high last week, so it comes recommended.