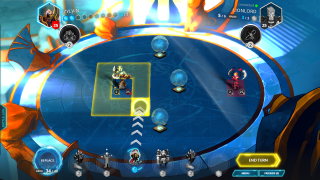 Hybrid digital card game and tactics battler Duelyst will shut down its servers forever on February 27th, 2020. Developer Counterplay Games took to Steam to announce the shutdown with a post titled “Farewell Duelyst,” saying it was “Saddened” to announce the game’s closure. As Duelyst is online-only, this is effectively the end of the game entirely. Though Counterplay Games is the design studio, Duelyst is published in collaboration with Bandai Namco. Players who recently purchased Diamonds, Duelyst’s in-game currency, can receive a refund.

Praised at release for its unique combination of tactical combat and card-based mechanics, Duelyst was often considered one of the best of the post-Hearthstone crop of digital card games. In Duelyst, players used their cards to summon creatures to a grid  battlefield, using unique placement rules to manipulate the tactical situation to their advantage. We called Duelyst “a gorgeous tactics card game [with] significant depth” in our review at release, giving it a strong 84/100, and it consistently placed on lists of the best card games . Duelyst was designed in part by Eric Lang, an incredibly popular designer in the tabletop games space. Duelyst was first released in 2016 after a beta period.

For me, this is yet another grim reminder that you don’t own any game published as a service model, and it can be taken away at any time.