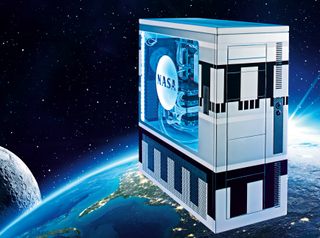 To boldly go where no Dream Machine has gone before

Unlike the computers that powered the Titan II GLV, however, our Dream Machine is orders of magnitudes more powerful than all the command centers on Earth back in the ’60s, as you will no doubt discover in the following pages.

So, strap yourself in and prepare to be jettisoned into the final frontier of computing!

If money were no object, what would the best PC look like? That’s a question that Dream Machine has always tried to answer, and this year’s build is no different. We’ve filled every PCI-e, RAM, and SATA slot we could with the highest-grade components that we could find. Make no mistake, this PC has enough horsepower to reach relativistic speeds.

1) GPUs: We grabbed the single fastest graphics card on Earth, Nvidia’s GeForce GTX Titan X, and then we grabbed three more and put them into SLI. Oh, did we mention that they are all liquid cooled and heavily overclocked?

2) Water cooling: Allowing our rockets to run at full capacity is our liquid-fueled custom dual-loop system from EKWB. This will ensure that our engine and rockets don’t overheat when we break the sound barrier.

3) Storage: You want hard drives? We’ve got four 6TBs of them mounted on the other side of the case. There’s enough storage here to last us years in outer space. They are perhaps only eclipsed by our four 1TB Samsung 850 Pro SSDs that we’ve put in hyper drive RAID 0.

4) Case: CaseLab’s Magnum SMA8 is an astronomical chassis that is equipped to carry all the cargo we need to send our Dream Machine into outer orbit and back. It’s also got a super sexy paint job from Smooth Creations.

5) CPU: The central processing unit behind our rocket is Intel’s Core i7-5960X, which is the most advanced CPU money can buy as of this writing. It’s got eight core engines, which we’ve boosted to Mach 4.5GHz speeds.

Note: Thanks to CyberPower PC for sending us the 4 Samsung 850 PRO SSDs!

Click the next page to read about the individual components.

Jimmy Thang has been Maximum PC's Online Managing Editor since 2012, and has been covering PC hardware and games for nearly a decade. His particular interests currently include VR and SFF computers.