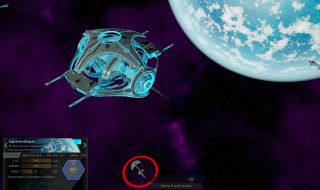 Distant Worlds 2, the sequel to one of the best 4X games, has been in development for four years, but we've heard very little about during that time. Today, publisher Slitherine has finally lifted the lid, just a little bit, and shown off the first screenshots, along with some details about the interstellar sandbox on its Twitch stream.

The first Distant Worlds is many things, but a looker isn't one of them. It's closer in appearance to Masters of Orion than its contemporaries. Distant Worlds 2 has made the switch, thankfully, to detailed 3D models and uses a new 64-bit engine, and the screenshots reveal that the upgrade has been, at least visually, pretty significant.

The team's goal is to make an even larger 4X game than the original, which had the benefit of three expansions and years of post-launch support, but at the moment it's only talking about shipbuilding.

Instead of just slapping components on a 2D ship until you run out of room, ships are 3D models with slots split up into different categories and a hull to protect them. There are more limitations than just space, then, and if damage gets through the hull it can take out specific components, making the ship less effective.

Space 4X games absolutely love making us design ships that we'll hardly ever see again and probably could have been created just as effectively by the auto-build option, and I will continue to lap it up. They're the last kind of games that needs that extra level of granular fiddling, but they all seem to have it. If that's not your cup of Earl Grey, hopefully Distant Worlds 2 will have the same approach to automation as its predecessor.

Distant Worlds can be extremely complex, and diving straight in is not recommended, even if you've got some 4X games under your belt already. Luckily, almost everything can be handed over to the surprisingly competent AI, letting you focus on the basics and only turn the rest on when you know what you're doing. It's also great if you're looking to escape the 4X cycle and just explore and have some space adventures. You can take control of a single ship, automate everything else, and just pretend you're Picard.

Check out the screenshots below.