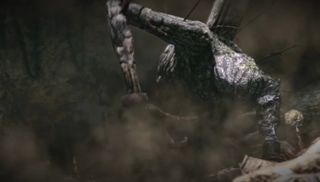 Obviously this new Dark Souls 2 trailer isn't an exhaustive round-up of the everything that wants to kill you, because, well, if it was, it would include everything . The sequel to the infamously gruelling third-person action-RPG will, at least, continue the tradition of creating imaginative and spectacularly designed enemies. Hopefully it's that sense of horrible wonder and intrigue that will keep you moving forward as some many-limbed monstrosity pounds you into oblivion.

One tradition that hopefully won't be carried over is that of shoddy PC porting. Dark Souls problems were eventually ironed out by modders, but for the sequel, comments by From Software suggest they're more prepared to conquer the platform. "For Dark Souls II we are developing on PC from the beginning," producer Takeshi Miyazoe said . "We realise what PC games typically require, and I can assure you that the PC version of Dark Souls II will be a good PC experience for PC gamers."

The PC edition of Dark Souls 2 will arrive slightly after the consoles , but should still hit the March launch window.