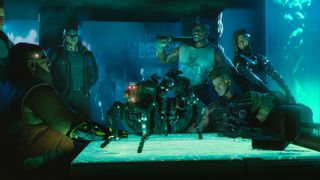 Cyberpunk 2077 was finally shown again at the Microsoft E3 2018 conference . It's another tightly scripted trailer, but it promises much more than the first teaser video. Shots of a character driving off into a futuristic city imply GTA levels of exploration, but in truth we still know near-to-nothing about how the game will look and play in its final form. Still, let's try and suck as much info out of the latest video as we can—it's an exciting, vibrant vision of a futuristic game world after all. Plus it has plenty of nods to the original Cyberpunk pen-and-paper game.

'The worst place to live in America'

"In 2077 they voted my city the worst place to live in America." The trailer's entire purpose is to give us a bottom-up montage of life throughout Night City. It isn't a smoggy, dark, rainy Blade Runner future, it's bright and colourful. There are palm trees, and spectacular punk haircuts.

In Cyberpunk the tabletop RPG, the city is based in northern California, and was founded by a rich man called Richard Night who wanted to create the perfect metropolis. He died/was murdered and gangs and corporations warred over the territory for years. By 2077 the city should be relatively stable, but it's reasonable to expect crime bosses and CEOs to feature heavily. It's striking that so much of the trailer is set in broad daylight and you can see motes of the Fifth Element in some of the city and vehicle design, particularly in this awesome hover cab.

If you're planning on getting into some crime in a cyberpunk future, it is very useful to have a bulletproof head. That hardware suggests these folks are part of a Boostergang. These augmented criminals often operate in Combat Zones, where law and order has dissolved completely and warring gangs blast each other all day every day. If you look very closely at the cab picture above you'll see a message asking the riders to "rate your ride with Combat Cab," which implies this could be a service ferrying angry auged-up gangsters to urban warzones.

The hovercar agents are wearing tactical armour that suggests they're the authorities in this particular gang war clip, but a bunch of scenes in the trailer (like the one where a shopkeeper pulls a shotgun on some robbers) create a sense of chaotic disorder.

We clearly see a divide between gangsters in the clip above blasting enemies in broad daylight, and more sinister corporate agents operating in dark rooms at night. A man in a suit analyses satellite shots of a mob from his armchair in one clip, in another hostesses attend to a party in an apartment high above the gritty streets. Cyberpunk settings often riff on hardboiled detective fiction, which often involved touring the milieu of a corrupt society. In the Cyberpunk 2077 setting mega-corporations control key territory and small-time mobs fight for the rest.

There are a couple of shots of futuristic murder in the trailer. A well-to-do sort on a plane smiles with satisfaction as a nearby passenger's head catches fire (look out the windows and you'll see that the plane is cruising at the outer edges of Earth's atmosphere—the future is awesome). In the clip below we see an assassin uncoupling from the connection they just used to fry the brain of a distant target.

For this particularly gory form of execution to feature twice in the trailer, it seems as though this may well be an important plot device in the finished game, whether you're solving murders performed by hackers or committing them yourself.

There will be VR

Although they might have changed their name by 2077, in the 2020 setting of Cyberpunk there's a videogames giant called SegAtari (yes, really) and the kid we see with a headset on may well be modelling one of their Rush Virtual Entertainment Systems.

There's been a lot of speculation among fans that something called Braindance, which is a virtual experience that allows users to relive other people's memories, will play a big part in Cyberpunk 2077. This could also be a nod towards that. The thing about Braindance that's different to headsets like the rad one this kid has is that if you die in Braindance, you die in real life.

This guy could be a stand-in for the main character, and is probably the narrator in the trailer. He has an excellent car and access to advanced weaponry, and he has the word SAMURAI sewn into his collar.

This all suggests he's an Edgerunner. In the Cyberpunk universe these folk are essentially lone wolf mercenaries and rebels who take dangerous jobs for payment and for fun. This is an awesome character to play in a sprawling cyberpunk RPG, of course. They can work for anyone, but it's a dangerous life. The trailer ends with our samurai fleeing from pursuers driving a deeply uncool and inferior car.

There's a quirk here. CD Projekt RED has suggested that you can create your own character and select your own class, so our samurai Edgerunner may only be one of a number of characters you could choose to create. In the pen-and-paper game classes—or 'roles', as they're known—include nomad, netrunner, solo, fixer, corporate and more. These roles are characterised throughout the trailer, in the augmented guy who gets drawn-on at a bar, the gangster trapped in an shootout in an alley, and more.

It still feels like the trailer is a proof-of-concept cinematic rather than a set representation of what the game will be like. It still gives us an exciting taste of what the final universe might feel like, however—bustling, vibrant, and dangerously chaotic.