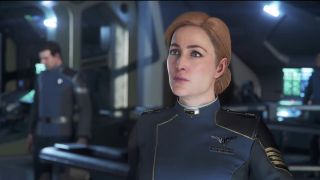 Crytek recently requested their lawsuit against Cloud Imperium Games be dismissed without prejudice and without conditions so they can refile upon the release of Squadron 42, since part of the lawsuit hinges on the game licence agreement (GLA) between the two companies only allowing CIG to use Crytek's engine for one game, Star Citizen. CIG dispute this, saying the GLA allowed it to use Cryengine for both, that Squadron 42 is accessed via the same launcher as Star Citizen anyway, and also that it's switched to Amazon's Lumberyard engine rather than Cryengine rendering the whole thing baseless.

The lawsuit has some more layers to it than that, but let's not peel the whole onion right now and instead concentrate on just the latest development: CIG filing a court document on January 17 demanding that the lawsuit instead be dismissed with prejudice rather than without, meaning that Crytek would have to pay at least some of CIG's legal fees.

You can read CIG's court document online, and it's certainly got some spice to it, calling Crytek's action "attention-seeking" and insisting that, "Crytek should not be allowed to aim its car at CIG’s storefront window, stomp the accelerator, smash through, do doughnuts for years, then back out and drive away to maybe circle around and crash CIG again another day.  Crytek richly deserves having its keys taken away for all time, so that CIG can conduct responsible business without further interference from Crytek or its series of lawyers."

The document also accuses Crytek of "falsely claiming that CIG did not switch to Amazon Lumberyard", the engine CIG say Star Citizen is now using instead of Cryengine, "and pretending that “new information” came out in discovery about the timing of the future release of SQ42.  In fact, nothing about release timing for SQ42 has been shared with Crytek."

CIG is requesting the release of a $500,000 security bond Crytek paid on filing "At the very least". Crytek have until February 7 to respond in turn.