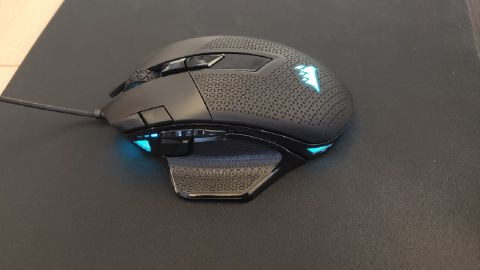 Corsair has further confused an already crowded product line-up with this top-performing mouse stuffed in an unfortunate chassis.

Corsair has established itself as a premium peripheral manufacturer turning out some of the pointers on our best gaming mouse roundup, vying to distinguish themselves in what is becoming an increasingly crowded field. The issue, however, when you establish a range of options in the same category is that you begin to compete with yourself, and Corsair has definitely launched a proliferation of gaming mice in the past few years.

Obviously, as someone who is constantly burning through a pile of mice for review purposes, this issue is a lot more evident to me than the average consumer. But it does also lead to some potential market confusion or buying fatigue, and you can see some of the effects of the proliferation of Corsair mice evident in the Night Sword.

The headline feature of the Night Sword, other than how it perpetuates Cosair's extremely colorful (and, frankly, awesome) blade-based nomenclature, is the tunable weight system. Pop off the plastic panel on the bottom of the mouse and you can tuck up to six weights into it to customize the weight for various applications. Need a heavier mouse for precise movements in a strategy game? Tuck all six weights in and you've got a hefty 141g pointer. Prefer a lighter mouse to whip around in the latest FPS? Empty it out for a fairly feathery 119g.

Even with all the weights removed, though, the Night Sword doesn't feel like a light mouse. This is a big, chunky chassis with a tall median height, which normally I would appreciate as someone cursed with giant paws. The issue is that the long, thick frame feels oddly svelte, the right side a sheer cliff from which I found my ring and pinkie fingers always dangling awkwardly.

To make sure this wasn't just an issue endemic to the large-handed, I passed the Night Sword to my colleague Gabe Carey, whose delicate hands resemble those of a concert pianist. Even with his slender mitts he found gripping it awkward, despite the rubberized side panels.

The other issue with the layout is the positioning of several of the Night Sword's ten (fully programmable) buttons. While it's nice to have a big selection of buttons whose function you can easily customize in Corsair's always improving iCue software suite, the sniper button on the left panel requires you to stretch your thumb forward uncomfortably, and the CPI buttons next to the left click are positioned in a way that forces you to change your grip or torque your fingers painfully.

By contrast, the main clicks (with Omron switches), the scroll wheel, two thumb buttons, and the pair of centerline buttons on the top are all satisfying and excellent (and within easy reach).

Also top notch is the new sensor, which Corsair is touting as their most advanced yet. It's a custom Pixart PMW3391 18,000 optical unit, and iCue lets you step through CPI settings as granularly as a single count at a time, and adjust the three default steps you can toggle through with the on-mouse buttons (and the sniper CPI) to whatever your heart desires. There's also a glowing RGB indicator by the thumb buttons that lets you know which CPI setting you currently have selected at a glance.

Speaking of RGB, the Night Sword is replete with it, with four zones that can be lit independently or tied to one of several preset patterns. While I find the default rainbow a bit of an eyesore/distraction, I admit the static ice blue I settled on pairs well with the matte black of the rest of the unit.

The Night Sword is as precise and festooned with features as you'd expect from a gaming mouse that retails for $80; the quality of the sensor is unimpeachable, iCue has become one of the better proprietary peripheral config suites, and the number of programmable buttons and the build quality are both entries in the pro column.

Unfortunately, it falters where actual usability is concerned. Even after several days of using it as my primary pointer, I never got used to the awkward feel of pushing it around my mouse pad, and gaming with it always felt slightly cumbersome. Given these issues, which seem subtle but are so core to practical, everyday usage, it's hard to recommend the Night Sword when there are so many better options at around the same price (or for slightly cheaper)—including a number of them from Corsair itself.

Corsair has further confused an already crowded product line-up with this top-performing mouse stuffed in an unfortunate chassis.