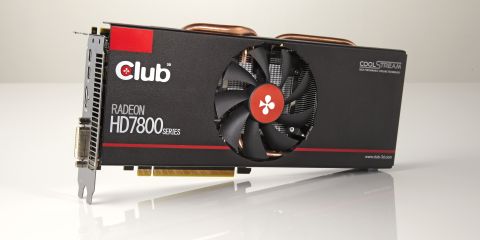 A fantastic value, great-performing little card. Easily one of my favourite of this generation.

I was rather disappointed to learn that it's probably going to be late this year before we see proper Radeon HD 8000 series graphics cards from AMD, but the silver lining is that in the meantime we get incredibly fast, incredibly good value cards like this Club3D HD 7870 XT jokerCard.

AMD's HD 7870 has been one of the stand-out cards of this generation since it dropped below the £200 price point. But this Club3D version is a very different kettle of fish altogether. It's actually running the same Graphics Core Next GPU as the one that's the beating heart of the HD 7900 series of cards. Yup, this is a HD 7870 with a chunky Tahiti chip humming away under that heatsink.

But what does all that mean in terms of performance?

Well, surprisingly, it means this sub-£200 card is capable of posting performance figures dangerously close to the £250 HD 7950.

In most games you're looking at just a few FPS on average short of HD 7950 performance. Even more impressive is the performance when you compare it against something like the Asus GTX 670 DirectCU II card. That's a card retailing for over £300 and in some benchmarks it's actually slower than this £172 Club3D card. That's almost half the price for better overall performance.

In short, there's practically nothing below the £300 mark that can really hold a candle to this card in terms of both value for money and sometimes even straight-line performance - and certainly not the equivalently priced Nvidia GTX 660.

And that's all before you start waving around the overclocking stick. I've played around with both this Club3D version and a Sapphire version too and both will run from the 925MHz base clock all the way up to around 1200MHz. That's a huge overclock, and really pushes up performance too.

For the money they're asking for this card it's a quite incredible little thing, able to play the latest titles even at 2560 x 1600 resolutions with post processing effects switched on, too. It may be sad that innovation in the graphics sphere is slowing down to what might become a two-yearly cycle, but if performance keeps getting faster as prices drop in this generation it's going to allay some of that misery.

A fantastic value, great-performing little card. Easily one of my favourite of this generation.