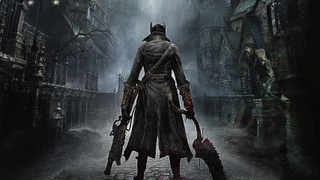 We might just do it. We might just will one of the best games ever made onto the best platform. Since Kotaku let loose the word that former PS4 exclusive Horizon Zero Dawn is due for a PC release this year, I've been bubbling over with newfound hope and optimism that after over five years imprisoned on the PS4, Bloodborne could actually come to PC.

If the rumors are true (reporter Jason Schreier is rarely wrong), then it stands to reason that my favorite FromSoftware game and one of my favorite games of all time, could get a PC release. The seal has been broken. The possibility exists.

Let's look at the reasons why I think Bloodborne on PC is no longer simply possible, but edging towards likely.

The console business is changing

Horizon and its devs are 100-percent Sony owned. With the exception of MMO studio Sony Online Entertainment (now Daybreak), zero Sony-owned studios have released a game on PC since Sony acquired them. But the dam just started cracking, with former PS4 exclusive MLB: The Show, also developed by a Sony-owned studio, announced for other platforms including PC.

If Horizon hits PC, it could signal a shift from a business that depends wholly on hardware to one that depends on the success of the ecosystem it builds between multiple platforms and the software it brings to life. The future of Sony and Microsoft's game businesses may rely on their ability to grab PC gamers as customers. Hardware agnosticism could actually be the new wave, especially if subscription and streaming services gain any ground.

Microsoft obviously has a head start with Xbox Game Pass and the relatively easy bridge it can build between the Xbox and Windows PC platforms. Removing the friction between people playing (and paying for) games within the Xbox ecosystem takes precedence over starting over with every new console release.

Head of Xbox Phil Spencer made it clear in an April interview with The Verge: "I think it’s easy from the outside to judge the health of our business around how many consoles any company sells," said Spencer, "In the end, how many subscribers you have to something like Game Pass, how many games people are buying, those are much better metrics on the health of the business."

The steady release of new consoles keeps the hardware moving without limiting players. Between the Xbox One, Xbox One X, and recently announced PC doppelganger Xbox Series S, there's a box for most budgets and needs with access to the same trove of games. Microsoft's embrace of stores beyond its own is working out well too. Its first-party games are returning to Steam, and Halo Reach's initial weeks as one of Steam's top-selling and most popular games has me thinking Microsoft's open approach has been a success.

The current streaming access to PlayStation games available through PS Now feels archaic by comparison. I didn't buy a 1440, 144 Hz display to play a poorly scaled, artifacted Spiderman. If Sony doesn't bust down a few walls soon, playing games on a PS4 or PS5 will feel like watching DVDs in the peak of the Netflix era. Bringing Bloodborne to PC as part of whatever big move into modernity Sony might be cooking up would send a strong message.

Fundamental industry changes aside, Sony wouldn't dare perforate the membrane between PS4 and PC just for Horizon Zero Dawn, alerting every Extreme PC Hobbyist to the slightest possibility that the impossible just became possible—would it? Hey, Nintendo: Mario on PC when?

It's almost certain that Horizon and The Show won't be the only PS4 games making the leap to PC. Schreier replied to a tweet beneath the Horizon news saying he doesn't think Horizon will be the only PlayStation game coming to PC. Sony itself hasn't been shy about its intent to show the PC a little love in the near future either.

Shawn Layden, chairman of Sony Game Studios worldwide, told business reporters at Bloomberg that exclusive games will be sticking around, but "... you will see in the future some titles coming out of my collection of studios which may need to lean into a wider installed base." Perhaps Sony's biggest flagship,  The Last of Us: Part 2, won't ever appear on PC, but legacy games with online multiplayer features are a perfect fit.

A Media Molecule co-founder is also on record saying that Dreams, a PS4 exclusive, on PC isn't just a possibility, it's a goal. If a game lives or dies based on its active playerbase, then tapping the PC is a good call. Bloodborne on PS4 has a small, dedicated bunch of players populating the multiplayer for PvP and co-op, but my summoning bell is often unanswered these days. A new global audience would keep those bells ringing for years.

The Souls series hasn't had the easiest time making the transition to PC. Dark Souls' first port was so busted that modders had to fix it. Dark Souls 2 didn't have as many problems, but didn't get the high-spec options expected from PC games. Dark Souls 3 worked pretty well, but had a few problem areas. It wasn't until Sekiro that a FromSoftware game hit the PC without any deal-breaking performance caveats.

Clearly, the PC port know-how is finally in place at FromSoftware and since Bloodborne is built by the same people on the same engine as Dark Souls 3 and Sekiro (with plenty of differences under the hood, I'm sure), I have to imagine it wouldn't be a terrible nuisance to bring to PC.

My one worry is that with FromSoftware busy wrapping up Elden Ring and whatever else it's cooking up, there likely isn't room between its remaining projects and staff to whip up a flawless port. But contracting some port work seems like an easy sell: What studio wouldn't want that on its record? The thing would be a massive hit.

Bloodborne sold over 2 million copies between its release in March 2015 and September of the same year. How many new players picked up the game in the last five years since is unknown, but given how Souls games have only been growing more popular—George R. R. Martin is helping out with the next one!—I imagine it's been a steady trickle. A PC release would turn the trickle into a firehose.

Sekiro had already sold 2 million copies back in April, and it's wrapped 2020 with multiple Game of the Year awards from big institutions, including Steam and The Game Awards. FromSoftware is on the map now, no longer a little Japanese studio plugging away at challenging, niche games. Souls games are mainstream. Soul sells, baby.

Souls games tend to live long healthy lives on PC, too. Modders are constantly remixing the Souls games with enemy randomizers and graphical updates, fashionistas are adding new weapons and clothes all the time, fight clubs take over popular locations for cordial duels between friends, community events regularly populate encourage players to start a new game and repopulate the multiplayer servers—PC gamers are in love with this series, and Bloodborne would undoubtedly see the same long-lasting affection as the rest.

Performance aside, that is. Bloodborne ran poorly on PS4 with low framerates and horrific hitches in Old Yarnham. Even a hardware bump with the PS4 Pro didn't solve Bloodborne's performance problems. Throw a GTX 2080 and an i7-9900K under that puppy and it'll sing. Toss in a few high-res textures if possible, and Bloodborne will feel as new as Sekiro did at launch.

Bloodborne's combat doesn't feel quite like Dark Souls or Sekiro, instead suspended somewhere between the two. Shields are out, which means dodging and parrying are the only way to avoid enemy attacks. Rather than parry with a melee weapon, you parry with guns in Bloodborne.

Fire off a shot at the exact right time and you'll stun an enemy and pull of a nasty visceral attack. You can also regain lost health if you attack immediately after getting it. Combat is fast and tense like Sekiro, while keeping one foot in Dark Souls with a suite of rad weapons, outfits, and RPG stats to tinker with. A perfect marriage.

And if Sekiro wasn't weird enough for you, then Bloodborne will fill your damn cup. There's a moment in Bloodborne where the true nature of the setting reveals itself and all the mangy werewolves and deranged villagers you fought take on a new light. I'll never forget it.

This is From's best story, most outlandish setting, and scrappiest combat, all capped with an excellent expansion that concludes things in a dreary, cold montage of ruined civilizations and desperate combat. Everyone deserves a chance to play Bloodborne, proprietary hardware be damned.