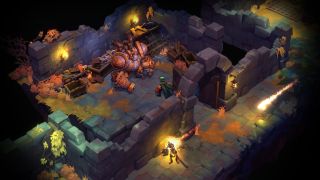 If something seems familiar about the game, that might be because of the people behind it, some of whom are former Darksiders developers, including the comic book artist responsible for its chunky art style, Joe Madureira. Battle Chasers is actually based on his identically named comic series, and takes the form of "an RPG inspired by the classic console greats, featuring deep dungeon diving, turn-based combat presented in a classic JRPG format, and a rich story driven by exploration of the world". So, a bit like Anachronox, it's a Western RPG in a JRPG mould.

Chris Thursten chatted to a couple of the people involved with Battle Chasers at this year's PC Gamer Weekender. You can watch that, and see some more game footage, here.