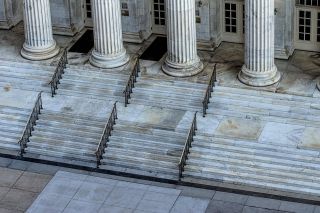 AT&T has sued the city of Nashville, TN over an ordinance that would accelerate the deployment of Google Fiber's gigabit Internet service. On the surface, the suit is about utility poles, though with AT&T planning on expanding gigabit Internet service in the area as well, it has a vested interest in not letting Google beat it to the punch.

The suit comes two days after the Nashville Metro Council passed a "One Touch Make Ready" rule that allows ISPs quicker access to utility poles. The problem for companies trying to expand is that when adding a new line to a utility pole, the pole's owner must be the one to move it. That process can take several months, the Tennessean reports, but under the One Touch Make Ready ordinance that Mayor Megan Barry signed into law earlier this week, a single approved contractor could move all the lines at once. Google argued that the policy change would reduce traffic and sidewalk disruption.

AT&T sees things differently. The company is concerned that if Google's contractors mess something up, such as damaging a copper feeder, then "1,000 or more residential customers could lose service, and business customers without redundant service would also lose service."

Barry had avoided taking sides in the dispute in hopes that Google and AT&T could work out an agreement on their own. That didn't happen, so now AT&T is seeking a declaratory and permanent injunction from the U.S. District Court for the Middle District of Tennessee to prevent Metro from enforcing the law.

AT&T is essentially using the same legal argument that its attorneys have used against Louisville, Kentucky, which is also fighting litigation against AT&T after the city passed a similar ordinance to One Touch Make Ready.

"AT&T remains committed to Nashville, and our more than 2,200 area employees will continue to turn our significant investment in the area into the fiber-optic based, wired and wireless connectivity that Nashville residents and businesses demand," AT&T Tennessee spokesman Joe Burgan said in a statement. "In addition, as we have maintained from day one of this discussion, Tennessee municipalities do not have jurisdiction to regulate pole attachments. And while we have worked with the mayor, members of council, NES, and others toward a better solution for Nashville, in light of the recent vote, we have no other option but to challenge this unlawful ordinance in federal court."

Google is not party to the lawsuit, though its parent company, Alphabet, has offered to lend its attorneys to Nashville.