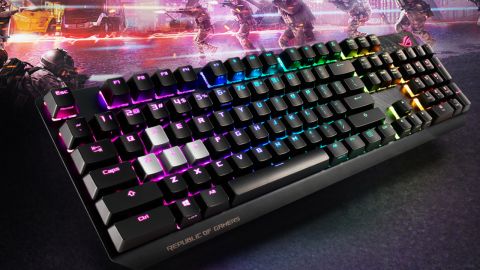 A reliable workhorse that trades in flashiness for dependable performance.

Good things come in small packages—at least that's the case for the Asus ROG Strix Scope keyboard. A manifestation of 'less is more,' this mechanical deck does away with bells and whistles to provide one scalpel of a machine. Compact and reliable, it doubles down on the essentials to brilliant effect.

You may not get that impression from looking at it, though; it sports an understated design, especially for something hovering around $170/£150. Featuring an unassuming matte-black coat with a corner of dark, brushed aluminium, it's classy yet undeniably modest. At 440 x 137 x 39mm, it's also on the smaller side. This is a contender for the best gaming keyboard crown that is nonetheless reluctant to draw attention to itself.

Well, apart from its RGB lighting. The board has 10 preset RGB patterns that can be rotated through with the FN and directional keys. Such ease-of-use became a recurring theme during our tests.

Indeed, out-of-the-box functionality is refreshing in an age where everything seems to demand the use of its own proprietary software. While you can download ROG’s Armoury II for greater customisation or to save system memory, it’s not necessary for great performance.

That sense of simplicity carries over to the Scope’s feature-set. Although it lacks passthrough capabilities and dedicated media controls, this keyboard has everything else you need (apart from a wrist-rest, anyway). There’s the usual anti-ghosting and N-key rollover we’ve come to expect. On-the-fly macro recording makes an appearance. ‘Quick Toggle’ lets you flip between media controls or standard function buttons, and you can store profiles via on-board memory too. Oh, and a ‘Stealth’ key will instantly hide all apps while muting audio (I’m not even going to speculate what that’s for). It's more than enough for most of us.

You can’t put a price on the fact that it just works, either. There’s no fuss. No confusion. It simply gets the job done. After months of testing keyboards that have let me down with sticky keys, inexplicably ghosting letters, and/or software glitches, it’s a relief to use something that does exactly what it claims to. The keys display a certain amount of wobble when tested, but that's the extent of my complaints (what's more, this didn't actually bother me during use). The Scope is dependable, and that’s precisely what you need in the middle of an RTS battle or Apex Legends firefight.

Which is what this keyboard is marketed for, by the way: first-person shooters. The elongated left CTRL sits within easy reach of your pinkie, and its extended length means that you’re not stretching to hit any keys. There's cool feedback for on-the-fly macros as well; the Scope's RGB lighting goes out other than for keys you’ve selected, making it easy to see what you’re doing.

And then there are the switches themselves. The Cherry MX RGB keys we received with our version proved to be as satisfying as ever. Providing a light bump of tactile resistance and a small yet satisfying ‘click’, they give pleasing feedback without distracting everyone around you. This makes the Scope effective even when in an office setting; colleagues won’t be overwhelmed by the relentless clacking you see with other brands (if Cherry MX RGB isn't your thing, the Scope is also available with Cherry MX Red, Black, Brown, Blue, Speed Silver, or Silent Red switches).

As a result, I can cheerfully recommend the ROG Strix Scope. It’s a keyboard that’s simple yet brilliantly, reliably effective. At $170 in the US and £150 in the UK, it’s a little more expensive than we'd like. However, I'd still argue it's good value for money—especially when it comes down in price. I’d actually recommend it over Razer’s new BlackWidow, the Scope’s closest equivalent in performance and features (though not cost, as the BlackWidow is admittedly $50 cheaper). Yes, this isn’t a showy deck. It could do with a wrist-rest and slightly more stable keys, too. But if you pick it up, it won't let you down.

A reliable workhorse that trades in flashiness for dependable performance.