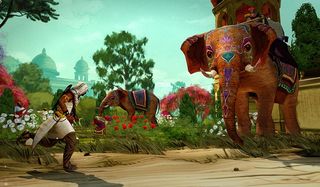 Assassin's Creed Chronicles is a very un-Assassin's Creed-like spinoff that takes the series into the unfamiliar territory of 2.5D stealth-platformers. It sounds like a stretch, but it actually works: The first game in the series, ACC: China, turned out to be quite good, and the new gameplay trailer for ACC: India looks equally promising.

Ubisoft said in a blog post that Assassin's Creed Chronicles: India will take players into the early days of the conflict between the British East India Company and the Sikh Empire in the mid-1800s. The Templars apparently have some role in it all, but you, as the Assassin Arbaaz, are more focused on stopping them from stealing the Koh-i-Noor Diamond, while at the same time trying to protect your lover, Princess Pyara Kaur. There's a powerful Prince of Persia vibe to the whole thing (which I mean entirely as a complimentary reference to the old ones), although I don't recall the Prince being quite this much of a murder machine in his quest to save the Sultan's daughter.