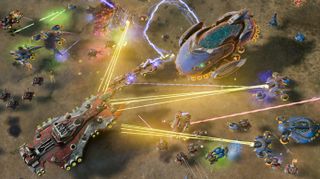 Ashes of the Singularity, Stardock's 64-bit, DirectX 12-native sci-fi RTS, has been on Steam Early Access for a few months now. But today it took a big step toward becoming a fully-fledged game with the release of its first public beta.

The big hook in Ashes of the Singularity is its ability to support battles of unprecedented size, with thousands of individual units taking part. This is accomplished via the native DirectX 12 support in the new Nitrous engine it's built upon, which enables each CPU core to send instructions to the GPU simultaneously, allowing “for more rendered units to be displayed on screen at the same time—by an order of magnitude—than in any previous RTS game to date.”

Managing those armies is simplified through the use of “meta units,” which are essentially massed formations of multiple unit types that will organize and take care of themselves. Big armies means big battles—a one-on-one match on a small map can be wrapped up in 20 minutes or so, but large-scale encounters with multiple AI enemies could run for several hours—but the actual mechanics are designed to be straightforward and simple to pick up.

“Our goal with Ashes of the Singularity is to help introduce a new generation of gamers to real-time strategy games,” Stardock CEO Brad Wardell said. “We want to make a game where players can invite their friends in and be up and playing relatively quickly, without a lengthy explanation about how to play.”

We had a look at the game ourselves, and the multi-core loading was exceptionally fast—so quick that there wasn't enough time to read the gameplay tips on the loading screen. The “meta units” also did a reasonably competent job of handling their business autonomously: Medics moved to heal assault units without waiting for orders, while artillery units held to the rear of formations, from where they could dish out punishment without putting themselves at unnecessary risk.

The Beta 1 release of Ashes of the Singularity, with single-player skirmish, co-op multiplayer, and ranked multiplayer modes, is available now from Steam and GOG. Stardock said Beta 2 is expected to be released next month, and that should make things even more interesting, with DirectX 12-enabled multi-GPU support, including mixes of AMD and Nvidia cards—something we learned a bit about last year. You can find out more about the game at ashesofthesingularity.com.