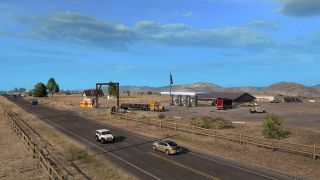 Do you like trucks? Do you like hauling things in trucks? I do, and I am very excited to tell you that American Truck Simulator is going to Idaho very soon. Announced by SCS Software on Twitter, the DLC covers… the entire state of Idaho. Where else did you think that sentence was going? It's a nice upgrade for American Truck Simulator players, who are slowly gaining an ultra-detailed map of the United States to drive about in. It's especially nice because right now heading to the Southwest from the Northwest involves hopping a bit of I-80 in the corner of Nevada, but now you can roll across the Rockies to Boise and beyond.

Look, I know you might not be excited by all of this, but some of us are. My actual favorite part is the description of the DLC, which honestly just sounds like a Wikipedia article or an Idaho tourism bureau brochure:

“Idaho is a northwestern U.S. state known for mountainous landscapes, and vast swaths of protected wilderness and outdoor recreation areas. The capital, Boise, is set in the Rocky Mountain foothills and is bisected by the Boise River, which is popular for rafting and fishing.

The state covers two time zones, runs from Canada to Nevada, and encompasses the western side of the continental divide of the Rocky Mountains. Rivers, mountains and farmland dominate the state’s landscape. The panhandle has emerald green hillsides, timbered mountains and pristine lakes. Central Idaho is covered with jagged peaks. The Snake River Plain, with its wide open vistas, irrigated farm lands and vibrant cities forms the character of Southern Idaho.”

You can go ahead and wishlist American Truck Simulator: Idaho on Steam. Here's some pretty pictures: