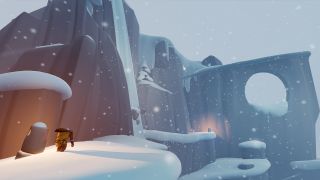 First unveiled on Sony's State Of Play stream, publisher Techland has officially announced Arise: A Simple Story today, and confirmed that it's headed to PC as an Epic Games Store exclusive on December 3rd.

It's a puzzle adventure by Spanish studio Piccolo, and tells the story of an old man's journey through life, starting at the end and retelling his tale one chapter at a time. There's no details on how it'll play yet, but judging by the announcement trailer below there's no denying that it looks great. Its dreamlike worlds are rendered with a bare minimum of textures, but there are some lovely lighting effects.

Techland calls Arise "an emotional journey through the life of two people where memories come alive and time bends to the player’s will", which sure sounds like time-manipulation puzzles to me. Perhaps not the most original concept now, but the trailer hints at some interesting scenarios, with some scenes shown multiple times but with noticeable differences.

The surreal scenes shown include a field of gigantic sunflowers that suggests we're going on a grand allegorical journey through the afterlife. Piccolo says that it all begins in limbo, with the old man being drawn forwards by visions of a woman and a glowing light atop a distant mountain.

While Piccolo is a small and relatively unknown studio, it roped in musician David Garcia, who won a BAFTA award for his Hellblade: Senua's Sacrifice soundtrack. It seems almost inevitable that it's going to be tugging hard on the heartstrings with Arise. At least I'm glad I've been given a few months warning to prepare myself.

Arise: A Simple Story arrives on the Epic Games Store on December 3rd. There's no word on whether it's a timed or permanent exclusive.