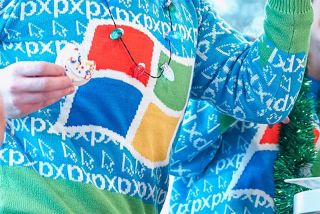 Last year, Microsoft got in the festive spirit and the weird tradition of ugly holiday sweaters by sending out a relatively small number of tacky-looking Windows 95 pullovers. It was the perfect holiday homage to one of the most important OSes Microsoft ever released. This year, Microsoft is upping its garment game with an ugly Windows XP sweater.

It's ugly by design, and oh-so-awesome, as was the actual OS (awesome, that is, not ugly). Anyone who has been playing with PCs for a couple of decades probably has fond memories of Windows XP. It's enjoyed an almost cult-like following and can still be found on some PCs even still today, more than a decade after its final release (Service Pack 3). Remarkably, Windows XP still clings to a 2.29 percent share of the overall OS market, according to Net Marketshare. And at its peak in 2018, it sat at just above 5 percent.

Part of the reason why it was so beloved for so long is because it was relatively lean (especially compared to later versions of Windows) and offered fast performance, particularly in relation to Windows Me. Yes, Windows XP had its share of issues, but the subsequent Service Packs did a good job of addressing bugs and bolstering its overall security.

It’s back! The #WindowsUglySweater warmed so many 💙s last year that it had to return—upgraded for our loyal fans, of course. What are your warmest XP memories? pic.twitter.com/S02WD89VdHDecember 12, 2019

Windows XP really shined for Microsoft, and now Microsoft is honoring it in kind. It's not just the sweater that's nifty, but the packaging as well. Yes, the packaging! Tom Warren, a senior editor at The Verge, received one and posted some images of the box the sweater arrived in.

Microsoft’s ugly Christmas sweater is Windows XP this year. It even comes in a softwear box 😂 pic.twitter.com/Oz0lNhryPIDecember 11, 2019

Sadly, Microsoft is not selling them to the public, at least not that I can tell. If it ever does, though, I'll happily tell Microsoft to shut up and take my money.