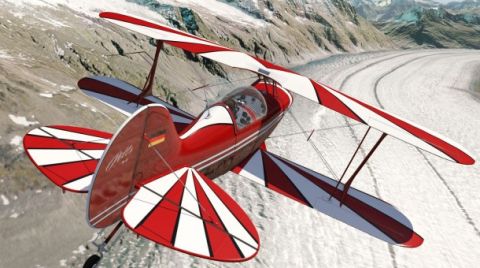 Anyone who thinks I'm going to use this review as an excuse to make a string of lame puns about aeroflyFS's Swiss setting is cuckoo. Clock those screenshots! Excruciating wordplay would be a disgraceful distraction from the real story: that a team of little-known German developers have fashioned the world's most beautiful flight simulator.

Fondue of flying in gorgeous surroundings? You will adore Ikarus's breathtaking depiction of the Alps. I've been gazing down at polygonal peaks for a quarter of a century and have never seen crags half as craggy, snowcaps anywhere near as crisp or cold. The textures and mesh are of such Heidi tail, there will be moments when you'll regret you can't bail out and ski or snowboard your way home.

Does it Matterhorn that the massive massifs can only be ogled at midday, and loom over lowlands not quite as pretty? Yes, it's a tad disappointing, but the baked scenery shadows and lack of 3D buildings in valleys mean the engine bustles along at a blistering pace, even on a middle-aged rig. In conditions where I'd expect sub-20 framerates in FSX, I enjoy 70-plus speeds in this sim.

Pair the swiftness of those framerates with the swiftness of the fastest flyable – an F/A-18 – and the effect is truly jaw-Lucerne-ing. Were there ruddy-faced hikers or yodelling goatherders wandering the slopes, they'd be totally implausible unless their AI routines included a 'hurl-yourself-to-ground-whenmaniac- in-a-hurtling-Hornetpasses- overhead-at-insanely-lowaltitude' behaviour.

Bern-storming valley runs are almost as exhilarating in the aerobatic machines. Like their six hangar chums, the Pitts biplane and Extra 330 come with beautifully crafted but non-clickable cockpits, animated pilots, and flight models flavoursome enough to satisfy all but the stickliest sticklers. While this isn't the sim to buy if you want to learn to cold-start a Cessna, that doesn't mean its stall recoveries and crosswind landings aren't hairier than a barbegazi's (Swiss version of a Yeti) buttocks.

For now, manually-selected galeforce winds and soupy fogs are as malign as the meteorology gets. As the GPS screens that grace every panel are never splotched by rainbow-hued blizzards and thunderstorms, and dusk and dawn aren't modelled, dramatic mood changes are not exactly a speciality.

After taking X-Plane 10 to task for such things last month, I think it's only fair I point out that the newcomer's airspace is always free of traffic and transmissions, and the terminals, towers and hangars round its runways are usually flatter than rösti. Trees fail to detect collisions. Lakes like Geneva and Constance can be used as landing strips. Like a chunk of creamy Emmental, the sim is absurdly tasty but also full of holes.

Treat this sweet Alpine delicacy as a rival to X-Plane or FSX and it's deeply inadequate. Treat it as a wonderfully accessible, ludicrously beautiful excuse for frightening ibex, starting avalanches and shaking the shingles off Schlösser, and it's mana from heaven. This is the kind of a sim I'm proud to [Don't do it! – Pun Ed] Toblerone. You might be too.