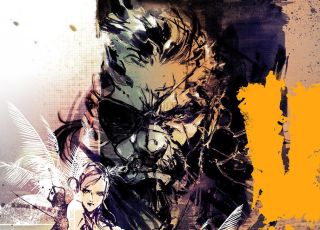 A few weeks ago, Konami released an annual update for Metal Gear Solid 5 that lets you play as Quiet in FOB missions. This, in turn, reminded me that a new Metal Gear game came out in 2018 that I've somehow forgotten about already—Survive, which didn't get a tremendous reception from us, and has just 23% positive reviews over the last 30 days on Steam at the time of writing (and mixed overall).

According to Steam Charts, 91 people were playing Survive in the last hour, with a 30-day average of 82.1. It's not spectacular for a game with a big multiplayer component that only came out in February. Metal Gear Solid 5's average player number has never dropped below 1500, however, and as I write this, well over 2000 people were playing it an hour ago. That's probably because it's one of the best stealth games ever made, and it's been discounted a lot since launch.

I'd hesitate before labelling Survive a total failure from a critical perspective, though, even if it's hard not to see it as an extremely late cash-in on the DayZ-era survival games boom from three or four years ago. I recommend reading Rich Stanton's thoughts on Kotaku UK, where he endured the game's tough early hours and eventually found something to like. That said, it sucks to see Metal Gear try something new, miss the mark, then seemingly be ignored. Ever since I started paying attention to games in the late '90s, Metal Gear has never been ignored.

There's such a dense and rich legacy to that series. Metal Gear has had a captive audience of millions that cares about a singleplayer stealth series for almost twenty years. It would be a waste not to make the most of that, at least from the point of view of someone who appreciates it.

Without wanting to get into the departure of Hideo Kojima from Konami, the effect of which is impossible to measure from the outside looking in, here I want to discuss some fun possible directions that Metal Gear could explore. I would argue there's not a magic formula to Metal Gear that's impossible to replicate—it is fundamentally a stealth action series with a great sense of humour, that rewards player experimentation with surprises and detail.

That's when it's at its best. The stories, odd dialogue, choices of themes and characters all matter too, but it's Metal Gear's design as a stealth game that counts the most. Just for fun, then, here's how I think Konami can make people care about its future.

Release an expansion for MGS5 (or make MGS6)

With The Phantom Pain still getting updates almost three years later, I wonder if a new environment, or maybe even remixes of the existing ones, might bring some fresh life and new interest to MGS5. The lifeblood of the game is in tools, enemies and environments. A new story chapter seems pretty impractical given the demands of making MGS's cutscenes, but what about a snowy landscape similar to Shadow Moses with some new missions, or a city? Or maybe just some VR challenges using the existing systems, like MGS and MGS2: Substance had.

Hey, if Endless Legend is still releasing expansions four years later, why not Metal Gear after three? Otherwise, a full sequel that builds on all of MGS5's strengths is probably the series' best shot at recapturing the attention it had before. Singleplayer stealth action is a lot closer to what I want from MGS than harsh survival systems.

Remake Snake Eater in the style of Metal Gear Solid 5

I'd love to see Snake Eater remade, ideally in the style of MGS5, with larger scale jungle environments and the precision controls of The Phantom Pain—minus the base management stuff, of course. Hell, you could even keep the same voice acting, since MGS3 still has the most evocative and least convoluted story in the series. It's a mostly self-contained tale about Big Boss, set in the Cold War, as he's dispatched into a jungle in the former Soviet Union to kill his mentor.

It has the best boss fights in the series, which is to say that it only has two average ones: the man who throws hornets, The Pain, and flamethrower space guy, The Fury. I'm not massive on tree-hopping man The Fear, either, after several replays. But it also has arguably the best ever made, a tense duel with an elderly sniper known as The End.

This is just a wild hunch with no basis in fact whatsoever, but my hopeful prediction is that Bluepoint Games is currently remaking a Metal Gear as its next project, following Shadow of the Colossus. If not, someone should remake MGS3. It's a modern classic, and a tune-up with a decent PC version would be fantastic.

Turn-based games have become huge again across all platforms in the past few years, noticeable in the likes of XCOM on PC (as well as the games it has inspired) and Fire Emblem on Nintendo platforms. Metal Gear Acid was a turn-based game for Sony's PlayStation Portable that required players to use cards to perform attacks, which at the time I considered a slightly disappointing substitute for a proper Metal Gear game on a handheld.

Now, though, I regard the Acid games as cult classics. Cards combined with turn-based combat is a perfect fit for the modern age—I think Acid would be huge if they made the game look modern and ported both titles across to PC, maybe adding extra levels, cards and a decent online versus mode. It's not strictly MGS, but it's a perfect match for strategy players' current sensibilities.

While MGS5 coming to the PC felt like a big event back in 2015, Revengeance came first. This Raiden spin-off that lets you slice up enemies into little bits ranked somewhere in the upper middle of Platinum's action game catalogue—above Bayonetta 2 but below Vanquish, in my opinion. Without knowing how the first one performed, I'd love to play a sequel. Metal Gear's weird mechs and cold near-future environments fit that type of game really well. Even the Metal Gear fanbase is a bit warmer towards Raiden these days.

Re-release the older games on PC

Metal Gear Solid and Sons of Liberty both came to PC. I remember the former being pretty decent—a little tricky to control, but a mild visual upgrade over the PSone original, which now, of course, looks like Lego. The first one is seen kicking around near the top of GOG's community wishlist, and with some controller support, I'm sure a lot of people would like to revisit it on PC. And hey, why did that MGS HD Collection never come to Steam?

The Phantom Pain shed a lot of light on the first two top-down Metal Gear games released originally for the MSX2, which I won't pretend I played for more than an hour each back when I had the MGS3: Subsistence edition on PS2. The story of the series is complete, but these are probably still the least played adventures starring Solid Snake. I would personally rather see the more recent games remade or play something new entirely, but this always gets brought up in conversations about how to revisit Metal Gear's legacy.