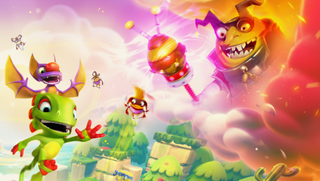 Yooka-Laylee and the Impossible Lair is a Donkey Kong Country game. It's inarguable. The lizard is wearing the great ape's skin. It's a side-scroller, you roll across the ground to defeat enemies and pick up momentum, get hit and Laylee dips out, collectibles are squirreled away in every level, there are far too many bees—there are even barrels equivalents! Little cannons that shoot you all over the place. Play a choice Donkey Kong soundtrack cut over Yooka-Laylee and the Impossible Lair and you've made the damn monkey game. I mean, Playtonic Games even brought on David Wise as a composer, the guy who wrote most of the DK music.

But I'm not mad that Yooka-Laylee and the Impossible Lair is basically a Donkey Kong game on PC, because being a Donkey Kong game means being a very particular kind of platformer. During a short hands-on session during E3, I can verify Yooka controls like a large ape, with weightier movements and jumps that reward building momentum by chaining leaps and rolls together. Expect to find level design gimmicks that grow in complexity and layer over one another as you move through a given branch of stages. Expect to find a lot of DK attributes in the once spiritual successor to Banjo-Kazooie turned two-dimensional primate tribute. Can you trace the tangled nostalgia directly back to the moment of loss?

There aren't many direct homages to DK like it on PC anyway, and Yooka-Laylee and the Impossible Lair isn't just doing a pale imitation (even if that lizard gives me the creeps). Playtonic Games is taking DK to the PC, and stepping things up a bit.

The Impossible Lair's centerpiece is The Impossible Lair. I won't get into the fat codices of Yooka-Lore, but the bad bee is back, baby, and he's built a lair that is purportedly impossible to infiltrate. In practice, that lair is one long, extremely challenging platforming level that throws every obstacle and enemy at the player in tandem, Yooka's platforming thesis is a bold extension of the usual Kong-inspired amalgamation of platforming death traps arranged in one terrible gauntlet. Except rather than combine those traps at the end of one set of levels, it's all the traps and enemies from the entire game mixed up in one huge level, and you can attempt it whenever the hell you want.

It's open from the start, so expect self-hating platform people to try it and, eventually, succeed without touching another level. The rest of us will need some help in the form of, uh, bees? Finishing levels in the overworld grants you special, kind bees that help you out in the Impossible Lair. At the start, you'll just have one life to attempt the whole deal. Every bee you save in the other levels gives you one more life in the lair, incentivizing players to take on as much of the other levels as they can to head into the lair with as big a safety net as possible.

It's a genuinely fascinating structural change to the typically linear level arrangements of platformers. Giving players a big, tangible challenge to overcome from the start is a great way to maintain urgency and demonstrate player growth and acuity. That all assumes the Impossible Lair is designed well, of course.

Even if you're a platformer masochist that needs to prove the Impossible Lair possible right away, there's good reason to explore the remainder of Yooka-Kong. The level select map looks like your typical top-down level select screen, but it functions as its own light-touch adventure exploration game.

It's also much bigger than your typical level select screen, and that's because it functions as a genuine overworld dotted with hidden areas, enemies, and puzzles. Characters give out little quests and most of your overworld interactions feed back into the platforming levels. For instance, finding a hidden pathway early on lets you undam a river, which then floods a level you might have already completed. If you head back into that level, you'll have the option to play a more difficult flooded version of the same level. More levels to finish means more bees to buoy Impossible Lair runs. Even poking around up top helps out with your greater goal.

As enamored as I am by the structural changes, I'm still not sold on the world and characters of Yooka-Laylee. It's like the writers have a book of puns strapped to a gurney in their basement lair, extracting sickly pun blood from a withering corpse. It's fun—we're in the pun business too—but oversaturated with one-note wordplay, leaving little room for interesting design or characterization beyond the jokes that make up the cast. I can take it, I suppose, but I'd like to see the same experimentation in structure given to the art and writing. It's a cute platformer starring an unnerving lizard. Run with it. (Banjo always freaked me out, too. Eyes too large, too wet.)

I'm also not sure whether the level design will rise up to meet the inventiveness of the Kong series. Recent entries like Tropical Freeze feature some of the best iterative level design gimmicks ever. My brief hands-on were with some early, simple stages. I rolled and jumped and dodged obstacles like I've done in many platformers before. It felt great! A near perfect recreation of Donkey Kong weight and momentum.

Playtonic nailed the basics. But seeing how enemies and obstacles grow in complexity and creativity over the course of several levels is where DK shines, and I didn't get to see Yooka-Laylee's own iterative process in action. We'll just need to play it later this year to find out.