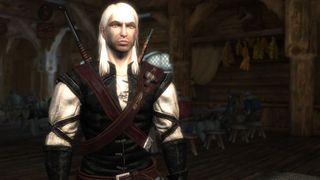 The Witcher was a bit of a rickety game when it came out in 2007. It's rougher around the edges than its sequels in some ways that are charming, and in some that were frustrating then and are only more frustrating now. Like many older games, there are some essential mods that make the experience more bearable for the new decade. The Witcher's selection of mods is relatively small, as most fans moved on to working on The Witcher 3 mods. But there are some vital ones. You can still play and enjoy The Witcher in 2020, though be warned that getting the Enhanced Edition to play nicely with Windows 10 can be a chore. Personally, I've had better luck using GOG over Steam.

Mods for The Witcher come in a few categories: visual updates, gameplay mods that either add features or fix old bugs, and new adventures created with the D'jinni adventure editor that comes packed-in with the game. We've collected the best Witcher mods for you below.

How to install The Witcher mods

Using mods for The Witcher is still mostly a manual process. You'll need to find the install directory for The Witcher and open up its "Data" folder. There you'll make a new folder and call it "Override."

Most mods will have you throw files in the Override folder totally loose rather than in subfolders. A select few will go in Data. Several mods on this list all replace the same files, so you may have to closely manage which you save to the directory first and which you allow to overwrite one another. Some recommend brewing your Override folder on your desktop before actually putting it back in the install directory.

Because there's so much manual work to do and loose files flying about, you'll probably want to treat modding The Witcher as a "set it and forget it" affair where you get a combo of mods you like and don't change them. Concocting a new mix of mods will probably involve starting from scratch or unravelling a mess of files like a tangled necklace.

Visual mods for The Witcher range from small fixes, like adding catlike eyes for every witcher in the game, to giant overhauls for every character and interface. There's only so much lipstick that can be put on an old game like The Witcher so you won't find anything here that brings it up to par with The Witcher 3, of course.

According to its creator, this overhaul mod updates about 80 percent of The Witcher's textures at double their original resolutions. It also adds some new audio files, though you may find the Skyrim sounds used for quest sound effects jarring when you're exploring Temeria instead of Tamriel. You'll want to manually get rid of the .wav files that begin with "quest" in the downloaded folders to axe them.

Unlike the Overhaul Project, the Texturen mod is a bit older and doesn't actually increase the resolution of The Witcher's textures. Instead they've been sharpened. The creator released a new installer (in English finally!) in 2019 so you'll find it a bit easier to get running. The installer has a painfully bright pink background that will hurt your eyes. You've been warned. The Texturen mod covers The Witcher's environments but none of the characters. To upgrade all the NPCs, grab the Hi-Res Character Models below.

The Hi-Res Character Models mod pairs well with Texturen. Neither actually increase the resolution of the game's files but have a sharper look that feels higher resolution. To a sharp eye, it may accentuate imperfections in the original textures. For most folks though, this is an easy way to give an updated look to an old game. Nothing can fix Zoltan's face, unfortunately. Even sharper textures can't help that mug.

The Black Edition mod won't fit everyone's taste but it's a large overhaul that recolors The Witcher's interface, a few characters, and Geralt's armor.  Almost everything is reimagined in black and red. Except the women of The Witcher who are distinctly less red. The mod author felt that the original Witcher game had too great a fixation on redheads and changed both Shani and Triss into brunettes. Oddly, they've also swapped out Geralt's face scar with a "wolverine style" one which is certainly a choice.

The Rise of the White Wolf

Rise of the White Wolf is another big overhaul that redesigns The Witcher's UI and all of its characters. While the new UI isn't particularly in keeping with the spirit of the original the way Black Edition does, RotWW does actually redesign all of the Witcher's characters instead of just marginally improving their textures. Triss gets a new outfit based on her Wild Hunt appearance. Morenn the dryad gets a lot less green. Zoltan is... no, Zoltan is still horrifically bug-eyed.

As an alternative to the big character overhauls above, Natural Shani just redesigns our favorite young medic. It's derivative of the work of a few other modders who also redesigned Shani whose mods are no longer available. As the creator says, it's a bit odd that a working woman like Shani would be running around in a minidress every day. This mod gives Shani some sleeves and leggings beneath her dress that look like she might actually be able to see patients in.

This mod is for the 4k gamers of the world struggling to read all of The Witcher's tiny text at a resolution it wasn't designed for. Now the letters are bigger. Hurray!

If you ever found it odd that Geralt just carries both his swords open on his back, the Scabbard Mod fixes that problem for you. All of Geralt's possible weapons have their own properly-shaped sheath now. The creator mentions that The Witcher was originally meant to have sword scabbards but they were removed because Geralt's animations would create clipping issues between swords and their sheaths. It's a minor inconvenience for a neat addition.

Another for the sword lovers is the Complete Sword Overhaul which adds new models to differentiate many of Geralt's swords. You can use this mod with both the Scabbard Mod and the Full Combat Rebalance but you'll need to pay close attention to the instructions and patches on the Sword Overhaul page to make sure they all play together nicely.

This retexture, among other things, makes Geralt look less perpetually perplexed than he does in the vanilla version of The Witcher. Eyebrows make all the difference.

The Perfect Blood mod looks to add some additional realism to The Witcher's combat. It adds wounds to enemies as you strike them relative to how much damage you've done. It also makes all the gory blood splatter look just a bit fresher than in vanilla Witcher. You'll also need the fix created by another modder below.

Perfect Blood hasn't been updated in some time and—though it apparently has some file issues—still remains a favorite. Another creator has uploaded a fix for Perfect Blood to make sure you can keep using it.

Catlike Eyes For All Witchers

It is a bit odd that Geralt is the only witcher with cat-like eyes, right? Shouldn't Vesemir, Lambert, and the others have witcher eyes as well? This mod replaces all the other witchers' round pupils with vertical ones.

Gameplay mods and fixes for The Witcher help to fix some notorious old bugs, overhaul combat, and make a few more lighthearted changes as well.

Full Combat Rebalance adds some extra difficulty to The Witcher's swordplay. It overhauls the skill tree and how damage is calculated between swords and armor sets. It can also make enemies scarcer but scarier if you want more tense combat. Its installer also lumps in a few other mods for convenience: cat pupils for all witchers, stacking inventory items up to 999, and the visible wounds mod that's also included with Perfect Blood.

This may not be the most glaring inaccuracy in The Witcher, but one mod author took issue with the fact that Geralt and the ladies he sleeps with never seemed to go anywhere or take any time to do the deed. Now after each encounter Geralt and his lover are moved to a more appropriate "after" location, have a line or so of dialogue to acknowledge their time together, and the game's time actually moves forward a bit. Oh, and Geralt's potion toxicity goes down after too.

This mod is a quick fix to a quest in Act II of The Witcher that often causes problems. With this, you'll be able to get all the clues you need to progress.

The Han plant in The Witcher is notorious for giving the wrong ingredient when picked. If you want Han Fibers from your wild Han because they're vital to your potion strategy, make sure to install this fix.

Does it bug you that Talar can die in The Witcher 1 and then, as if nothing happened, come back in both sequels? Talar is now a survivor.

New adventures for The Witcher are made with the D'jinni Adventure Editor that comes with the game. Modders have created lengthy additional quests for the game that add new NPCs, stories, quests, and locations. Below are a few interesting choices for expanded questing. You can find more over on ModDB, where they're relatively easy to pick out of the small selection of 30 or so The Witcher mods listed.

Merry Witchmas is a fan-made adventure that was eventually folded into The Witcher itself. The mod authors say they've made additional changes, though, and downloading the most recent mod build is still preferable.

And a Curse, and Love, and Betrayal

The Crossroads is a mod that redecorates the village of Murky Waters into the setting of a grim conflict between two bandit factions. Despite being stranded by Roach's death, Geralt gets in the middle of the town-wide conflict.

As usual, Dandelion is in trouble and Geralt is the one to get him out again. He'll need to save the wayward bard from a hanging and also defend the town of Carreas from invading fleders.