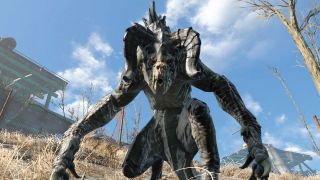 In the summer of 1999 I bought a copy of SiN, a first-person shooter by Ritual Entertainment that featured a preposterous hero named John Blade and some brilliantly dynamic, interactive environments. It was released a month before Half-Life, and thus was completely overshadowed, but Ritual did a lot of stuff Valve did in its game—and better. I loved it, at least until I reached a level set in some kind of underwater facility. I remember a lot of swimming, some frustrating enemies, and a labyrinth of boring corridors.

And, being a lot more impatient in my teenage years, I decided to bypass the entire level by activating noclip mode. Noclip, as PC gamers of a certain age will know, is a console command that lets you fly around the level, passing through walls and ceilings. The term was popularised by id Software, its first-person shooters often featured a noclip mode—as well as many games built on the Quake engine including Half-Life and, yes, SiN.

Teenage me was delighted, because I was able to breeze through that stupid underwater level. There was an undeniable feeling of guilt, a lurking sense that I was cheating the game—and myself. But over the years, in those glorious early days of PC gaming, I used noclip regularly in a lot of different games to get past sections I couldn’t be bothered with or that were too hard. I figured if the developer put it in there, surely I should be allowed to use it?

I don’t use noclip to cheat these days, but it’s still, often, a very useful console command. In buggy games where progress can be halted by, say, a door or set-piece not triggering, it’s invaluable. More than once I’ve used the tcl (short for ‘toggle collision’) command in Bethesda RPGs such as Fallout and Skyrim to bypass broken sections of a level. An inelegant solution, and I really shouldn’t have to in the first place, but at least we have the option, unlike console players who can end up stuck.

But my favourite use for noclip is peeking behind the Wizard of Oz’s curtain. I spend a lot of time exploring videogame environments, taking screenshots, making videos, and generally admiring the art. It’s a part of game design that has always fascinated me. Which is why, when a game has a noclip mode, I always take the opportunity to escape the bounds of the level and get an idea of how it was built. Even if a game doesn’t have a noclip command, it’s usually possible to hack one in using a tool such as Cheat Engine.

One of the first times I did this was in the original BioShock. Its equivalent of noclip is using the ghost and fly commands, and doing so gives you a fascinating glimpse at how Irrational built the stricken city of Rapture. During the opening bathysphere descent I flew out of the pod, soaring above the entire sequence, getting a bird’s eye view of it. And it was surprisingly beautiful, even when viewed from angles a player was never meant to see.

And it was possible to see how the developers had pieced it together. That whale that swims by waits patiently off-screen until the bathysphere passes it, like an actor waiting for their cue to go on stage. The amazing Rapture skyline, with its blinking neon signs, is mostly just flat images. You’d never know in the bathysphere, of course. But when you get up close, it’s like one of those towns in an old western where the buildings are all thin plywood facades. This does ruin the magic somewhat, but even knowing the truth, that sequence still gives me goose bumps every time I play it.

Recently I used a camera hack to access a noclip mode in Hitman 2. I already knew IO Interactive had some of the best environment designers in the business, but being able to move around those levels freely made me appreciate their talent even more. I don’t know how developers feel about people poking around like this, and I’m sure some of them are mortified by people seeing assets that were only ever meant to be seen from afar up close. In any game with a large, distant group of people—the crowd in a racing game, perhaps—noclip lets you see the ugly truth. Weird, polygonal mutants that were only ever designed to give the suggestion of a person from far away, who you half expect to say “Kill me!” in a mournful voice. But for me it’s a way to appreciate their work on a deeper level. And if I ever replay SiN, I’ll be using noclip to skip that damn underwater level again.