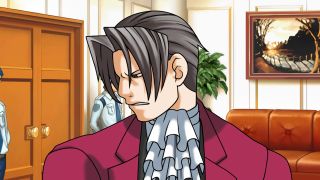 Not a whole lot of game franchises offer character development that bridges several instalments. It’s easy to see why—you don’t want to make it too hard for people joining a franchise late to get up to speed with what happened to its heroes. Sometimes however, you get a chance to start at the beginning, especially now, thanks to all these re-releases.

That’s how I met Miles Edgeworth. Miles is Ace Attorney’s not-so-secret star, because his relationship with protagonist Phoenix Wright supplies much of the game’s narrative backbone. Due to it giving you different cases to solve, I expected Ace Attorney to be a collection of comedic, but ultimately unrelated one-shots. But Miles quickly establishes himself as your ongoing antagonist, and he makes a great anime foil—a fop with the most dramatic fashion sense, a permanent scowl and no time for nonsense.

His alarming reputation succeeds him. Miles, they whisper in the hallways, doesn’t care about justice, he only cares about upholding his conviction record. What a revelation then, an unexpected delight, that this grumpy fellow cares about justice very much indeed. Behind his stoic shell hides one of the most dramatic backstories I’ve had the pleasure of discovering in a long time.

Miles Edgeworth’s story is so good to me because it takes the bully who otherwise might have become a villain and offers him redemption. Miles and Phoenix go way back. They became childhood friends after Miles stood up for Phoenix in a dramatic classroom trial, inspiring the latter to take up a career as a defence attorney. But their paths diverged, chiefly due to the trauma Edgeworth experienced when his father died—trauma that would fuel his relentless chase of criminals later on. Without giving too much away, the backstory is still almost hilariously overwrought, but all in all we can understand Miles’ motive. He became vulnerable and was basically led astray into the role of Phoenix’s adversary. Only when he becomes a suspect himself and has to deal with the feelings of helplessness he inflicted onto others does Edgeworth understand what he’s done.

Edgeworth admits this to himself, which leads him to help Phoenix out more than once and even grudgingly accept help. It’s so enjoyable to watch, particularly because he doesn’t ever unthaw. Miles doesn’t become nice or, God forbid, soft. At first, this makes Edgeworth more akin to a running gag, the fop who gets flustered by the shenanigans around him. But every once in a while his shell cracks and something endearing slips out—like how he’s a massive fan of Ace Attorney’s in-game TV show Steel Samurai.

While part of Edgeworth’s slow transformation comes from the fact that he can’t seem to beat Wright in court, he is only able to truly move on when he finds closure regarding his father’s death. What a simple yet powerful message—before you can show justice to other people, you have to experience justice yourself.

Miles Edgeworth characterises how we’re all looking to do the right thing but sometimes get waylaid through no fault of our own. Miles wanted a new father figure and thus modelled himself completely after his mentor Manfred von Karma. His story shows that when we’re looking for our place in the world, we may end up following someone because it’s the easier thing to do, but playacting someone else won’t sustain us.

In Phoenix, Miles Edgeworth recognises the person he could have been, and across several games he mulls that over. But that’s another attempt at being someone else.

Over the course of the Ace Attorney games you hear from Miles less and less as the series introduces you to new protagonists. He comes to an agreement with Phoenix that ensures both sides focus on finding the truth, rather than trying to one-up each other. Official art depicts Edgeworth as part of the large, happy courtroom family, where he joins picnics and beach trips.

Eventually he finds his own thing, and it’s reassuring that sometimes it takes even videogame characters years to settle into themselves.