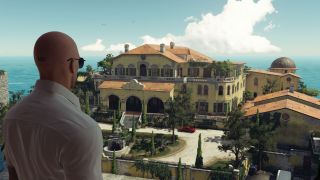 Find all previous editions of the PCG Q&A here. Some highlights:
- What was the last game or service you subscribed to?
- Which keys do you always rebind?
- How do you hold your mouse?

Did ten years just go by? Wow. While we sit here wondering how that could have possibly happened, we're going to be spending some time reflecting on the highlights of the past decade of PC gaming.

And today we're craning our memories back over the rapidly ending decade to pick out favorite levels from the past 10 years. A great level is challenging, creative, and something you continue to think about long after you've beaten it along with the rest of the game.

Our question this week: What's the best level of the decade? What level sticks in your mind and defines the entire game for you? We've got a few of our answers below, and we'd love to hear yours in the comments.

So many games feel like you're on rails, going through the motions. Dishonored 2 gives you a variety of tools and powers, then sets you free to find your own way through its environs. In a game full of choices and great level design, the Clockwork Mansion reigns as their sovereign.

As someone who studied computer graphics back in the '90s, I know that simulating the real world is difficult. 15 years ago, creating large moving objects and levels that could be altered was too much for our PCs of the time. You'd end up with smaller areas (eg, Half-Life's set pieces), or clever hacks, or lighting and shadows that didn't look right. But Clockwork Mansion blows its nose at such limitations and repeatedly shifts its walls, floors, and ceilings as you progress through the level, letting you see all the moving bits and pieces.

Or not. You can skip most of the test chamber in the Clockwork Mansion if you want, though you really should go pull the levers at some point just to watch the whole construction in action. The clockwork soldiers that stalk the rooms are also a wonderful take on steampunk automatons powered by windup springs, calmly speaking their current state while they search for intruders. You can even reprogram them with the right tools, rather than fighting them directly. Despite the many paths through the mansion, all of them feel equally valid. There are few levels in a game that can stand up to Dishonored 2's Clockwork Mansion.

If I could just say "all of Ori and the Blind Forest" I would. The entire game is a masterclass in pacing for a puzzle platformer. Ori always knows when to teach you a new skill and when to push your mastery of it. The most memorable level in the game is the timed escape from the Ginso Tree in which you have to constantly keep ahead of the quickly rising water. It pushed me to execute a lot of a particular jump move that the preceding level made me practice quite a bit. I thought I'd mastered it but I can't tell you how many times I fumbled and died trying to keep pace in that escape. Each death got me higher up the tree and a further look at my next moves. By the time I finally emerged from the top, my hands were sore and sweaty. I can't wait to see how Ori 2 tops it.

The One With the Fish, as it would be called if it was an episode of Friends and not the most messed-up level in XCOM's Enemy Within expansion. You're sent to Newfoundland to investigate a fishing village that has gone dark, and when you get there the locals have been zombified. On the docks, sharks and big fish hanging from hooks start bursting open—they've been incubating chryssalids, the four-legged terrors who turn civilians into zombies. You have to fight along the docks as these gross things pop out of shark guts and attack you, and like the zombies they rush to fight up close. Your best pal cover is no help in this mission, you just have to move forward and keep shooting until you find the source of the nightmare. In a hollowed-out ship you discover it: A dead whale infested with chryssalids, hatching out of it like wasps from a caterpillar.

The only thing to do is call an air strike and run like hell, bolting to the extraction zone before the bombs fall and cleanse this horror. But the chryssalids are fast and they don't stop hatching, forcing you to turn back and shoot, hurling all the missiles and grenades you normally preserve just so that some of your squad gets out of there while the heroes who saved them get caught in the same airstrike as the aliens. XCOM's never been more tense than this level.

Valve facelifted many of Counter-Strike's maps in the last decade, but the 2016 de_inferno remake stands out as my favorite. Counter-Strikers are extremely resistant to change—layout tweaks to Counter-Strike maps practically feel like they have to be approved by two congressional bodies before entering the game. Although a vestigial closet-room in Apartments got nixed, the nature of the Inferno rework was almost entirely visual. And looking at the then-and-now, you realize just how monotone CS:GO's maps were upon launch, and how much can be done to breathe new life into something that's a decade and a half old. Modern CS is sunny, colorful, and a model of readability.

Left 4 Dead came out before 2010, I know, but its final DLC level came out on October 5, 2010. I loved the last dose of DLC for L4D2 and L4D, a crossover event that starts with The Passing in L4D2 in which the two sets of survivors meet and cooperate, and concludes with The Sacrifice in which Bill (canonically) sacrifices himself to save the rest of the bunch. But that moment articulates in the campaign in a pretty special way. Bill doesn't have to be the one to die each time, obviously. It's whoever volunteers to die. Or, in my experience, whoever is voted to die.

In the final climax, the survivors need to start three generators to lower a bridge, climb on, and then raise it to cut themselves off from the horde and make a clean getaway. But one of the generators gives out as the bridge rises and the only way anyone will survive is if someone jumps down and restarts the problematic generator. In every L4D campaign up until that point, the more people that survived the better. The Sacrifice adds another layer of asymmetry to the asymmetrical genre L4D pioneered, integrating a nuanced and stressful zombie movie moment that completely shakes up the team dynamic. Someone's gotta die, and soon.

I have so many memories of my teammates screaming at one another on that bridge over who has to restart the generator. It's a lot of pressure! And there's not always some grizzled Bill-esque vet on the team who's always down. The Sacrifice forces an impossible decision on a team that's been taught to survive together for two whole games, and now someone has to volunteer to do the opposite or everyone is screwed. I love that moment, so potent and dangerous, full of shouting matches, grand acts of nobility, cowardly fakeouts—it's straight up enforced role-playing.

It's a shame it's the last we saw of L4D because it proved the series was capable of so much more than we realized, but I have a feeling it's not gone for good. Bill's totally dead though. I read the comic.

There are so many frantic and chaotic levels in both Hotline Miami games, but Death Wish totally takes the biscuit because of its soundtrack. Pelting bullets into goons and completely decimating floors is one thing, but perfectly choreographing your movements to Roller Mobster's epic beat, especially when the music first drops, is definitely a level that sticks with me. Honorable mentions: Release and Execution.

I fluctuate between Dishonored and Hitman when it comes to the source of the best level of the decade, but since Jarred's already mentioned Dishonored 2's phenomenal Clockwork Mansion, I'll go with my favourite baldy assassin and his lovely summer holiday in Italy.

There are so many exceptional levels in just the last two Hitman games, but Sapienza is particularly special. There's just so much going on! You start in the town, initially, chilling on a bench, but inside the already pretty huge vacation spot is a heavily guarded mansion, which you'll of course need to infiltrate, and then a huge secret laboratory underneath it. Another game might have split this into three levels, but IO learned from their mistakes with Absolution and gave us a frankly ridiculous murder sandbox to play with. The episodic model hasn't gone down well with everyone, but Sapienza also felt like evidence the developer could make it work. If you're just coming to Hitman now, don't blow through Sapienza to get to the next one. Spend some time there. Work on your tan. Kill some more people.