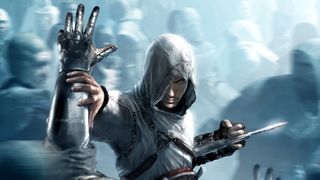 Find all previous editions of the PCG Q&A here. Some highlights:
- What's a cheap game that's way better than its price led you to expect?
- What was the last game story you really cared about?
- What game do you want a 'Classic' version of?

Not many people play the Final Fantasy series in order, but then they aren't telling a single continuous story. The Assassin's Creed games sort of are, but it seems pretty common for players to dive in and out based on whether a given protagonist or slice of history is to their liking.

But then there are other series where it really is expected of you. Especially in RPGs that let you carry over a character or world state, like Mass Effect and Dragon Age. That said, if you skip the first Mass Effect because you're not that into its more old-fashioned and intrusive RPG mechanics, the second one's not a bad place to start. We've all done something like that, whether we go back to fill in the gaps later or just assume that it's fine never actually finding out what happened in the first Saints Row. What series did you play out of order? Let us know in the comments below.

Technically I played Call of Duty 4 before all the others, which naturally didn't affect my enjoyment, given there's no thread between the stories except that they feature a man with a mustache called Captain Price. What Modern Warfare did do, though, is send me back to play Call of Duty 2, which has a phenomenal campaign. That came out when I didn't own any decent gaming hardware, so I was pleased to get the opportunity.

I'll also take any opportunity to skip a non-essential Assassin's Creed game. I didn't complete a single one between Assassin's Creed 3 and Origins, but that didn't bother me at all. Do they have an interconnecting story? Probably. But ultimately it's the individual assassins that help make those adventures engaging.

I had never played a Metal Gear game before the Phantom Pain, but it got some great reviews and so I figured it should be fun. I started it up and made it through the exposition, which was full of people and situations that meant nothing to me. It didn't help that the "you're recovering from a coma" sequence took far too long, but eventually I was out into the open world riding a horse. Then these weird things started dropping from the sky and teleporting around. None of it made any sense. After a couple of hours, I bounced. There was clearly a lot of backstory that I was missing, and frankly I couldn't be bothered. I know many people love the series, but there are just too many other games out there, and I don't have the time to play through all of the other MGS games to get a clue about what's happening. Sorry.

I know a guy who played Half-Life 2: Episode One before Half-Life 2. And the thing is, his logic makes sense. It's got the words "episode one" in the name, of course it comes first! Me, I played Knights of the Old Republic 2 before the first one because my housemate rented it back in the days when you could rent videogames and I was curious about it. Turned out, it was pretty good! But when said housemate found out I hadn't played the first one he basically sat me down in front of it and said "Play this damn game, it's totally your thing!" He was right, it was.