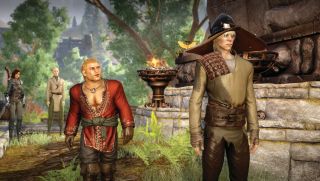 Find all previous editions of the PCG Q&A here. Check out some highlights:
- What was the first downloadable game you bought on PC?
- What's the meanest thing you've done in a game?
- Which demo did you play to death?

Why does this one tiny thing have to be so annoying? That's basically the subject of today's PCG Q&A, where each of the PC Gamer writers discuss their petty grievances with the games they otherwise enjoy. These range from how resolution options screens work to the quality of ladders in games.

What minor flaw in a game makes you madder than it should? It can be a specific thing in one game, or an issue that recurs across a bunch of the games you've played. In our case, we picked things that crop up regularly in the games we play. Well, regularly enough that we decided to complain about them here.

We always like to read your answers in the comments, so please do share them with us.

Samuel Roberts: Bad ladders and dialogue that stops halfway through a sentence because you triggered more dialogue

Every ladder in GTA could be my last. As summed up nicely in Chris's round-up of the best and worst game ladders and the gif above, GTA's ladders feel like a 50/50 punt. It's a very easy death. That's generally fine with me, because you don't spend much of the game climbing them, really. But there's one mission in the Online heists where you have to climb to the roof of a building in order to pick off targets with sniper fire, and the journey back down those things is far scarier to me than being shot at by NPCs.

The finale of the heists should've just been climbing down fourteen ladders in a row without dying. It's the most heart-stopping set piece GTA could possibly muster.

My other choice is dialogue—either from an audiotape or an NPC who's talking to you—that's cut off when you activate a new bit of dialogue. Either you never hear the rest of what you were being told, or you have to start an audiotape again. This is so minor, though, and I want you to know I'll somehow be okay if no one ever solves this.

There's a mod for Dragon Age: Origins that lets your dog be an active party member without having to kick out one of the fully voiced companions. It's essential. Don't make me choose between my dog and my videogame boyfriend, that's cruel and also Alistair might cry. Same goes for Shadowrun: Dragonfall, which is one of the best RPGs around but makes you choose between all of its cool characters and the one who is a bit boring but happens to be a hacker. It's a cyberpunk game, as if I'm going to leave behind Hackerman. Let me bring them all.

I don't care if the fights are longer or it makes some of them trivial, I just hate having to play favorites with my imaginary friends. Some of our nostalgia for old school RPGs is misplaced, but having your entire party available all the time is one thing I do miss about them. I will fight for my right to parties of six or more characters.

Philippa Warr: Birds I can hear but not see

I get that adding birdsong feels like just another tool for making a forest feel normal rather than a dead space filled with trees which don't move in the breeze correctly. But if you are accustomed to walking in actual woods or forests or being outdoors, loud birdsong with zero visible birds really highlights how artificial and strange the digital space is. There are, of course, tech limitations and time limitations to factor in. Those elements (and others) mean that it's often not worth a developer trying to fill these spaces with life when you can use a shortcut like birdsong to imply life. I get that. But it breaks the spell of a space so completely for me that I find it disproportionately aggravating. Give me a blackbird or a bluetit or SOMETHING!

Look, this doesn't matter at all. But it's common, especially in console games, to say something like "Press A to Start" (or "Press Enter to Start"), as though that's the only acceptable input. But then any damn button will do the same thing! Don't lie to me, game. You're being sloppy! Don't you even know what your own commands do? Sloppy, sloppy, sloppy. And it's rampant! There's a whole Giant Bomb wiki page dedicated to pointing out the inconsistency.

Some of you are probably thinking, "Wait, that's not a minor issue..." but the truth is, much of the debate about framerates beyond 60fps is exaggerated. There, I've said it. I have 1440p 144Hz G-Sync and FreeSync displays, and 4k 60Hz G-Sync and FreeSync displays, not to mention plenty of 60Hz fixed refresh rate displays. I hate it when a game limits me to just 60fps, or even 144fps (eg, PUBG), but does it really matter? I've been playing Dark Souls Remastered, locked in at 60fps and 4k, and if I have FRAPS running I get angry at the developers for putting in that limit. But if you took away the framerate counter in the corner and just had me play the game, I'd likely never notice. (Note: 30fps caps are a completely different matter—I can and will notice choppiness at sub-60 fps.)

Chris Livingston: also a button thing for me

Press E to open this crate. Done looking inside the crate? Then press Escape to close it. But why? If I tap a key to open something, be it a crate or some menu or the inventory, I should be able to tap the same key to close it again. In game where you're constantly looting, opening, scavenging, scrounging, and inventory-ing, especially in a game where you control your character using WASD, it's annoying to have to move not just your finger but your entire hand to close something that you just opened a moment ago by just moving your finger. Open and close. Same key.

James Davenport: Clicking too many times on a resolution menu without back and forth selection arrows

I suppose part of the problem is personal, but I wouldn't ever have to confront my issues if there were just back and forth selection arrows to jam on. It's less of an issue with modern games, but I still wonder how many minutes of my life have been spent clicking one too many times in nearly inoperable graphics selection menus. I could've used that time to write a bad screenplay or get better at making sandwiches. We'll never know.