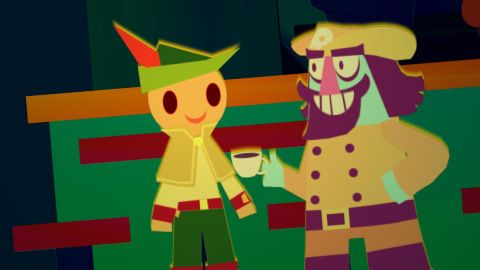 I listened to Wandersong's soundtrack while writing this review, and I've been happily jiggling my leg throughout.

What is it? A happy puzzle-platformer about a bard who wants to save the world.
Expect to pay: $20/£15
Developer: Greg Lobanov
Publisher: In-house
Reviewed on: R9 Fury X, i5-3570K CPU, 16GB RAM
Multiplayer: Nope
Link: Official site

If you press 'alt' at any time while playing Wandersong, you'll do a little dance. As you travel across the world, you'll repeatedly run into a character who teaches you new dances—new ways to rhythmically gyrate. There is no reason for this. At no point are you required to dance. But you will—and I did—because in Wandersong you're encouraged to just… go for it. To express yourself and have fun interacting with the world and with your character.

Wandersong is charming from the off. I was walking to-and-from the main village of the first act, and, without really needing to—without there being a puzzle to solve or character to impress—I started singing. Wandersong is a game about singing. Move the mouse (or the control pad's right analogue stick) in one of eight directions and you'll sing a different note. Throughout the game, you will use this central interaction in many enjoyable and surprising ways.

You'll also use it because it's there. And because it's fun to fill the space in which you're travelling with music and dance. Because the oft-cheerful background music begs to be filled in with your transient musical doodling. Because Wandersong is delightful and playful and lets you embody a cheerful doofus who can't help but sing.

That doofus is a bard who learns that the world is going to end soon, when the goddess Eya sings the song that will create a new universe. It's the natural order of things, and while it sucks that the bard and everyone he knows will stop existing, there's really nothing he can do—he's not a hero, after all. Still, Eya's messenger takes a liking to the bard, and suggests that—and this is a longshot—he could try to learn the Earthsong from the world's Overseers. It probably won't work.

Getting his hopes up regardless, the bard teams up with a witch named Miriam to collect the fragments of the Earthsong. Miriam is ostensibly the bard's polar opposite—withdrawn, antisocial, and just generally not a fan of aimless, joyful singing. The way the pair's relationship develops over the course of the game is genuinely touching. While these characters initially feel like a collection of broad personality traits, Wandersong's story develops into something more subtle and complex. It lets its happy bard and irritable witch explore what it means to maintain those traits as fully realised characters.

As you move through the story, Wandersong reveals its deeper layers. It starts to subvert your expectations of this non-heroic bard's heroic adventure. Your grand quest is filled in by the smaller, more personal stories that are the game's true heart. It becomes a game about loss, acceptance, regret, friendship, and the intimacy of colliding with another person's life. It's usually funny, but sometimes sad, and while the big story beats border on saccharine, it's the smaller character details—the people you meet along your journey—that ultimately resonate.

Much of Wandersong is spent traversing the 2D environments of the world, speaking to characters and delivering setpiece musical performances at key moments throughout the story. Your basic objective in each act is to learn the song that will transport you to the spirit world, where you do some light puzzle-platforming on the way to meet that region's Overseer and collect their fragment of the Earthsong.

The spirit world's platforming challenges—singing to make flowers extend up to higher areas, or to shape pulsating platforms, or to redirect the wind—were inevitably my least favourite part of the game. While it's fun to see the new ways your singing can manipulate the world, the jumping is a bit too loose to support these sometimes lengthy sections of precise gaps and perilous puzzles. The challenge in these sections fits with the story being told, but I much preferred wandering about, singing at folk.

Wandersong might be the most heartfelt platformer that I've played since Night in the Woods. And while I don't think its message is as specific or revelatory, it's still a worthwhile and clever exploration of its themes, and a reminder that there's joy in the act of play.

I listened to Wandersong's soundtrack while writing this review, and I've been happily jiggling my leg throughout.