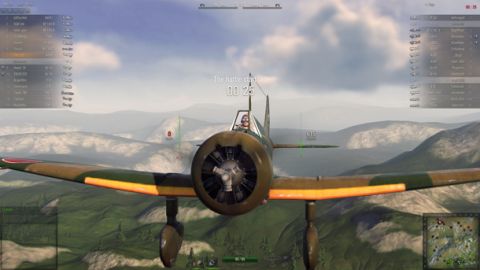 With lovely graphics and great matchmaking stability, World of Warplanes remains entertaining even as its simplicity wears thin.

A dogfighting multiplayer game focused on the aircraft of World War 2 and Korea never seemed like a natural fit for mouse and keyboard. World of Warplanes faced an almost insurmountable dilemma: if it was easy to control, it wouldn't feel like actual flying and dogfighting, and if it did feel authentic, then it would probably exclude most of its intended audience.

Yet somehow, Wargaming.net pulled off a miracle, and made a fun-for-all dogfighting game that is recognizably in the tradition of Red Baron or Secret Weapons of the Luftwaffe. It feels shockingly natural with mouse and keyboard controls, and I spent my first few days with World of Warplanes marveling at that achievement. Then, as the pace of unlocks slowed down and the grind began, I realized what was missing: a competitive game that invites teamwork and tactical depth. Wargaming achieved air superiority, but wars are not solely won in the air.

Warplanes is at its best during the early stages. You start with a hangar full of Tier 1 aircraft , meaning the kinds of biplanes that were cutting-edge in the late 1920s and early '30s. Accruing XP in each aircraft, you can hoard those points for purchasing the next plane in the tech tree (all the way up to advanced jet-fighters at Tier IX) or spend them on upgrades for your existing plane.

Once a plane is maxed out, it earns elite status, meaning that all XP earned in that aircraft can be turned into “free XP” that you can spend on anything... for a price. So because I was an absolute killer with the German Arado 65 and the Japanese A5M (the precursor to the Zero), I continued flying those even after unlocking much better aircraft, and used a small amount of premium currency to make their experience available across every tech tree.

I also flew those aircraft because they remained a fun and distinct experience even after I had access to higher-level planes. The Tier 1 biplanes are slow, fragile, and absurdly maneuverable. They are pure dogfighters, and a completely different experience from their successors, which are more about managing speed in the midst of a giant furball. It's to Warplanes' credit that the game never turns into an XP chase for the next great airplane, but instead has a different flavor for aircraft of each era.

But if you want to have a wide variety of aircraft across the different tiers, prepare to cough up some cash. Even the $80 package of 6000 gold will only buy you room for 20 or so aircraft, and that won't save you any time on the grind. While I'm not sure I'd ever need more than 20 aircraft on-hand, it definitely feels like getting the full World of Warplanes experience costs an eye-watering amount of time and money. Especially when you consider the astronomical costs of more advanced aircraft and upgrades.

I'm also not sure the investment of either is that richly rewarded. The selection can be a bit odd and redundant. Every air combat enthusiast has a “dream team” of aircraft, and a lot of those are missing here at World of Warplanes' launch. The German Focke-Wulf 190, for instance, is easily the second or third most iconic Luftwaffe aircraft of the war, but it's nowhere to be found here. Nor is the RAF's Hurricane, nor the American P-47 Thunderbolt.

These are huge gaps and, more important, lead to a lot of unexciting upgrades among the mid-tier aircraft. While model revisions matter, it's hard to get excited as you work your way to the third variation of the P-51 Mustang in a row. Too often, these variants feel like filler as players wait for the missing stars of WW2 combat aviation to make their appearance.

It's also in this stage when the fundamental simplicity of World of Warplanes begins to feel like shallowness. To an extent, this is not Wargaming's fault. Warplanes is a game about dogfighting, which basically means that two teams fly at each other, and then all hell breaks loose. Despite the diversity of visually spectacular maps—with battles taking place above a desert lake, a Pacific atoll, an Arctic peninsula—the fact remains that there's no terrain at 18,000 feet in the air. There's no real space for team tactics because everyone is just twisting and turning through the battle, making split-second decisions and then getting swept away again by momentum. The games themselves last only a few minutes before one team or the other is completely shot out of the sky.

There is an attempt to add a MOBA element to this, but it's not very developed. Teams can theoretically win games by getting supremacy (destroying enough ground targets to win the game). So heavy attack planes can always go off on strafing and bombing runs against enemy ground installations and, if enough of those are destroyed, their team wins.

But theory and practice are miles apart on this. Aircraft engaging ground targets are easy prey for their high-flying cousins, and ground targets soak up so much punishment that once the bomb supply is exhausted, strafing runs are more erosive than destructive. In the meantime, those aircraft wasting time on ground targets are sorely missed in the skies above as their outnumbered teammates get rolled up. In the 150-plus games I've played so far, I can count the number of “supremacy victories” I've seen on one hand.

The mouse and keyboard controls also begin to show their limitations as the aircraft get faster. With slow, agile Tier 1 aircraft, you can do a lot of small movements and tight, twisting turns. Not too hard with a mouse.

But when you're trying to stay with a BF-109 while turning out of a 350 MPH dive, suddenly that joystick gathering dust in the corner looks a lot more inviting. While there are more advanced options you can enable that make the planes behave a lot more like actual planes, tuning the mouse controls and fiddling with automatic stabilizing settings takes a lot of trial-and-error to find a good balance. I still have yet to find a group of settings that makes a barrel roll as natural and effortless as it is in a proper flight sim. It's the irony of accessibility: the basics get so basic that intermediate techniques end up being much harder.

Still, mouse and keyboard is the way to go. To its credit, Warplanes offers great support for advanced flight sticks such as my Saitek X52. But the problem is that it's not really the tool for their simplified flight model. Because Warplanes completely separates pitch, roll, and yaw from one another, it becomes almost impossible to execute even a simple banked turn without applying tons of rudder. It is also manifestly not the way planes work, to the point where it breaks from reality so completely that it introduces its own dissonance.

Still, World of Warplanes doesn't really need to have brilliant, convincing controls. It is succeeds at what it sets out to do: make fast-paced air combat easy, accessible, and fun for a large audience. It brings to life the chaos and excitement of a huge aerial furball, with planes diving and twisting through rivers of tracer fire and dense clouds, black smoke belching from the engines as they avoid collisions at the last possible second.

Warplanes also manages to make the achievement chase fun and meaningful, even though the stat tracking itself is nowhere near as detailed as it should be. Winning an “ace medal” by racking up five kills in a single mission is a tremendous achievement, and running up the kill count on the “sky scourge” medal—basically a kill-streak tracker across several games for as long as you can avoid being shot down—turns World of Warplanes into a tense score chase where death suddenly has consequence.

I'm not sure World of Warplanes will ever become an obsession the way some competitive free-to-play games do. Even here at the end of my review, I can feel my interest starting to wane. It's still something I will likely jump into at odd moments, when I only have a few minutes to play a game and feel like some quick, action. But on those terms, it succeeds brilliantly. In time, perhaps new game modes and aircraft types will make it more diverse and interesting, but for now, it's everything it needs to be: a fast, accessible air combat game with no flight-sim baggage to bring you down.

With lovely graphics and great matchmaking stability, World of Warplanes remains entertaining even as its simplicity wears thin.