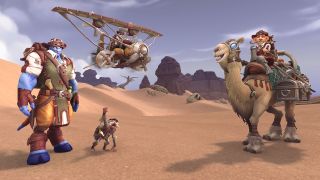 You'll still be able to teleport to each other, and when you're both in the same party you'll get a 50 percent experience bonus. The new programme also lets you recruit up to ten friends, as long as they've not purchased game time on that account for two years.

Whenever one of your recruits adds game time to their account, they contribute to your rewards, starting at one month. Each recruit contributes to the pool, so a reward that would normally take three months to unlock could take one, if you've got a trio of recruits. A single recruit could also buy multiple months of game time. After unlocking the 12-month reward, you'll get a game time reward instead, doled out every three months.

You can keep track of this in-game, using the Recruit A Friend panel. It will tell you what rewards are available and when you'll get your next one. There are also special challenges that you can complete with your recruits, netting more rewards.

It's not yet clear what will happen to the old rewards, and if they'll be available via some other method. The new rewards, all themed around exploration, look neat, but it will be a shame if there isn't a way to get the unique mounts and pets that the old programme offered.

Blizzard hasn't given a date yet, but it will be returning in the next few months. The rewards, aside from game time, will only be available in regular World of Warcraft, not WoW Classic.