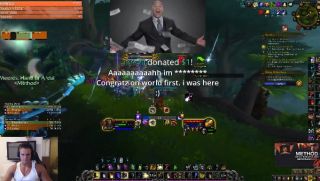 World of Warcraft’s new expansion Battle for Azeroth launched last night, and the level cap has already been met.

It took just four hours and seventeen minutes for Gingi, a member of World of Warcraft’s hardcore guild Method, to make the jump from WoW’s previous level cap of 110 to the new cutoff point of 120.

Gingi livestreamed his race to the level cap on Twitch, playing as a troll druid named Luigingi. He achieved the time using no special tricks other than completing quests as quickly as possible, having apparently devised a plan during beta.

Ginji was aided to the title by two other Method Guild members, Deepshades and Meeres. You can see the moment Ginji hit the level cap below, or sit back and watch the full four-hour endeavour if you’ve got the time to spare.

The previous record for reaching a level cap was five hours and 28 minute. This was achieved by Fragnance, who at the time belonged to the guild Serenity. Ironically, Serenity has since disbanded after a bunch of members, including Fragnance, defected to Method.