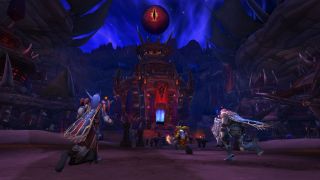 World of Warcraft Horrific Visions are new scenarios you can complete solo or with 1-4 additional people. By completing Wrathion’s objectives in that scenario, you can obtain a legendary cloak upgrade, which adds to its item level, appearance, and passive/active powers.

WoW Horrific Visions were added in patch 8.3 this month, and they’re unlike any other content currently in WoW. Follow my guide and you’ll successfully come out the other end with those cloak upgrades, items, and Corrupted Mementos to make future Visions a cinch.

Getting started in WoW Horrific Visions

To enter a Horrific Vision, you’ll need to have a Vessel of Horrific Visions in your inventory and click the gateway you opened in the Chamber of Heart as part first Patch 8.3 quest. If you're in a party, the leader must be the one to click on the gateway and queue the group.

How many scenarios you’ll need to run, and which wings you need to complete, varies with your cloak level. Starting with rank 10, run a couple of Horrific Visions to complete the objective. By rank 14, it takes six runs to complete, so continue to collect those WoW Coalescing Visions so you can do multiple runs each week.

You’re having a vision, now what?

Your first vision won't get you a cloak upgrade. As part of the opening quest series for patch 8.3, you only need to experience the vision, so run straight for the end boss to complete the scenario immediately.

You can see the boss objective almost immediately. While you're in the vision, your sanity ticks down from 1000 to 0. When it hits 0, unless you are resurrected by a party member (who gives up half their sanity to do so) or Titanic Archive abilities, your run is over. You successfully complete a run when you kill the end boss: Thrall in the Horrific Vision of Orgrimmar and Alleria in the Horrific Vision of Stormwind.

Buy a Vessel of Horrific Visions from Wrathion before starting this quest. You’ll already have one from earlier quests, but you must exchange 10,000 Coalescing Visions and buy another Vessel to receive proper credit.

Once you’re done you receive another Vessel, so you can run another two Horrific Visions immediately using the two vessels you’ve obtained from quests. For these, your strategy will be different.

The importance of Titanic Archives

As part of your questline, you will have saved up some Corrupted Mementos, and likely obtained some from the end-of-scenario loot chest from your Horrific Vision, too. These are used as currency to buy research at the Titanic Archives, which are accessed via the console next to M.O.T.H.E.R. in the Chamber of Heart.

The skills you train on the Titanic Archive tree are specifically designed to help you last longer in Horrific Visions and complete longer objectives. The first trait you can purchase—and it’s cheap—is the Orb Operation Manual, which gives you the ability to drop an orb for your group that restores everyone standing in it to full sanity. It also resurrects dead players or those whose sanity dropped to nothing.

This is the first significant way to extend your experience in Horrific Visions. There's a hard cap of three uses per party, regardless of how many people have the trait. (There also appears to be a hard cap of one resurrection per scenario, so it’s a good idea not to die if you can help it.)

For the next tier, choose traits designed to help you either solo or in a group. Unless you’re running with a full party, it's almost always better to take the solo abilities, particularly because of the strength of Emergency Cranial Defibrillation, which automatically resurrects you if you run out of sanity or die.

From there the trait tree becomes more linear. You'll eventually fill all traits, making you competitive for the more-difficult clears of Horrific Visions, including those involving masks.

Tips for seeing your way through a vision alive

You get more rewards in your end-of-scenario loot chest depending on how many wings you do, what objectives you complete, and how many mobs you kill. But that doesn’t mean you should pull everything in sight.

Anything that slows you reduces your ability to finish objectives in time, and some creatures’ attacks—particularly effects you can dodge or move out of—reduce your sanity. Because you can only use sanity orbs out of combat, deliberately take breaks when your party is running low on sanity, so everyone can stand around out of combat to fill back up to full.

For instance, in the Orgrimmar scenario when we were still early in the cloak upgrade process, my two-person party would head to the Drag first, using one orb around where Garona was found, another before the end boss of the wing, and another before tackling Thrall.

Be warned that each wing you complete makes the end bosses more difficult by giving Thrall and Alleria abilities that the end bosses used. Allot time appropriately. If you fail there's a catchup mechanic which allows you to make up those levels in future weeks. Starting this week, only one cloak upgrade can be earned per week, which makes this week’s maximum level 7.

Pay attention to the objectives Wrathion gives you for each cloak level: they inform which types of wings to do while you’re in visions. Tainted areas are the main areas in which end bosses inhabit. These drain your sanity the least and are the easiest to complete. In the Stormwind scenario, that’s the Cathedral District.

Corrupted areas are the next easiest. Depending on your gear you may want to wait for a cloak upgrade or two, but at least the first Titanic Archives trait to enter these areas. The 'Torn Pages of Curse and Stone' for Wrathion’s objectives come from these areas.

Finally there are the Lost Areas, which has included Old Town and the Mage Quarter. These are significantly harder, but you’ll need to complete them for the 'Torn Pages of Fear and Flesh' which come as part of Wrathion’s objectives at cloak rank 6.

Completing all five areas and the mini-objectives you find inside result in bonus loot from the end-of-scenario chests and the ability to use Masks to upgrade the difficulty. Each area confers a different type of Madness, which causes ill effects to you as you attempt to complete the run.

Getting a peek behind the Masks

You start earning the ability to use Masks as you get better at the basic Horrific Versions. You earn your first mask by clearing all five areas in the vision, then by wearing a mask and completing the Lost Areas of the next vision.

Masks add progressive difficulty to each run, and each mask you wear stacks those bad effects. They reduce your maximum sanity; cause you to spawn void zones that reduce your sanity if you stand in them; increase sanity damage taken from creature attacks; cause you to receive additional types of Madness debuffs while in Visions; and spawn hostile creatures.

Clearing visions with Masks on greatly increases the difficulty, but also increases the rewards you receive at the end, both in terms of item level and in the number of Corrupted Mementos you earn.

Use the usual flasks and buffs you would for a tough dungeon as part of your Horrific Vision. Cooking recipes also drop in the lesser visions that make different kinds of food that help you complete visions on time; I strongly recommended you use one of these for your food buff.

Cloak upgrades will also reduce the speed at which you lose sanity.